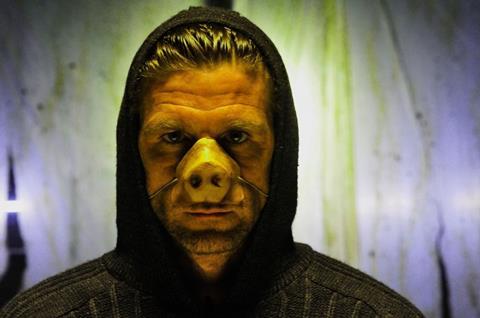 Dark, brutal and unrelentingly downbeat, British revenge drama Piggy is saved from being just another run-of-the-mill bloody British crime film thanks to impressive turns by Paul Anderson and Martin Compston and astute cinematography and soundtrack.

Paul Anderson is a grippingly dangerous personality, portraying ‘Piggy’ as a brooding, deadly  and at times playfully charming character.

In the end, though, there is more style than content, and while debut writer/director Kieron Hawkes shows a good deal of panache in terms of camera movement and the film’s gritty tone, the script is rather obvious and mannered and any twists telegraphed early in the story. Unlikely to find much of a theatrical audience, its life lies mainly in home entertainment and those fans of the ‘bloody British revenge drama’ genre.

Martin Compston (The Disappearance Of Alice Creed) plays Joe, an awkward and shy man (and possibly the slowest moving courier in history) who only comes out of himself when his more out-going older brother John (Neil Maskell, from Kill List) arrives in London to force Joe out into the world.

After a run in with a group of typical clichéd snarling thugs in a pub, Joe is murdered and Joe retreats into himself, once again abandoned. That is until there is a knock on the door and man calling himself Piggy (Paul Anderson) is on the door-step, claiming to be an old friend of Joe. Piggy has bloody revenge on his mind, and soon he and Joe – wearing fake pig noses to disguise themselves – set about attacking, kidnapping, torturing and killing members of the gang who killed John.

The easy violence of Piggy acts as a contrast to Joe’s outwardly low-key and restrained nature, but given the film relies on psychological twists as it dwells identity and inner turmoil (and has Compston deliver some po-faced voiceover lines about life, society and alienation) the supposed ‘twist’ comes as no surprise.

Piggy is beautifully shot by James Friend who comes up with two visions of London – a bright and genial day-time and a dangerous burnished night-time – though the film could do with judicious editing. The modest story runs far too long as it delivers one London skyline vista after the other.

Thankfully for the film, Paul Anderson (who played Colonel  Sebastian Moran in Sherlock Holmes: The Game Of Shadows) is a grippingly dangerous personality, portraying ‘Piggy’ as a brooding, deadly  and at times playfully charming character who really dominates the film. Neil Maskell adds pep to the early scenes, though Louise Dylan as the girl who slowly falls for Joe is never really developed.

It isn’t so much that Piggy is a bad film, because it isn’t. It is well made, nicely performed and shows promise. Mostly that its thoroughly nasty story isn’t interesting or compelling enough, and as the violence escalates it simply becomes less and less interesting.