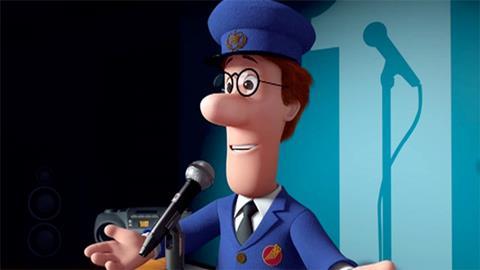 Postman Pat is a very popular stop-motion animated character amongst pre-schoolers in the UK.  Like Bob The Builder, he has enjoyed success in overseas markets, mainly because the problems he solves delivering the mail in Greendale are simple and straightforward and unspool over 15 minutes, which dovetails nicely with a four-year-old’s attention span. His sidekick Jess the Cat might get stuck up a tree, for example, or his son Julian could lose his football. He may even rescue a runaway cow.

The bigger suspense surrounding Postman Pat The Movie is where its potential audience might lie.

In Postman Pat The Movie, Pat’s fully-computer-animated eggy head, voiced by Stephen Mangan, bobbles around the screen for a full 87 minutes, singing and dancing his way through a TV talent show called You’re The One, hosted by the acid-tongued “Simon Cowbell”.

Pat is taking part in the show because his employer, the Special Delivery Service (SDS), isn’t giving him a bonus, and he wants to take his wife to Italy. The SDS is also sneakily replacing Pat with an army of slightly scary (at least to the under-fives) mechanised robots.

That’s a lot of plot for the booster-seat brigade. (“Daddy, what’s a bonus?”). The bigger suspense surrounding Postman Pat The Movie, however, is where its potential audience might lie. The smart money is on DVD, where Pat has already shifted over four million units, along with some scattered TV sales.

Director Mike Disa has lined up some sterling UK voice talent, from Jim Broadbent to David Tennant and Rupert Grint, alongside a soundtrack from Ronan Keating and The Saturdays. More is needed, though, to persuade parents to race to their local multiplex and pay premium ticket prices for this basic, slightly garish computer animation.

Postman Pat goes out in the UK at half-term, although much of its natural audience doesn’t actually attend school yet. While the feature film is “edgier” than your average Postman Pat television episode, with threatening robots and cats, your average seven-year-old already finds Postman Pat a bit “babyish” so rain and general bad weather would help greatly with theatrical returns.

Animated by RGH Pictures and produced by Lionsgate Films and Icon Productions, Postman Pat the movie has some selling points: a lengthy tracking shot through Greendale kicks off proceedings with aplomb, and Stephen Mangan is excellent as Pat, with Ronan Keating stepping in on vocals (Signed, Sealed, Delivered I’m Yours, for example, while The Saturdays perform their version of Please Mr Postman).

The plot may be convoluted, but children’s films must always have a moral, and thus Pat tells long-suffering parents:  “If the people you love aren’t here to share your success, maybe you’re not successful after all.” In response, children may well ask, enough about success and bonuses, what happened to the helicopter and the train, which only make cameo appearances.