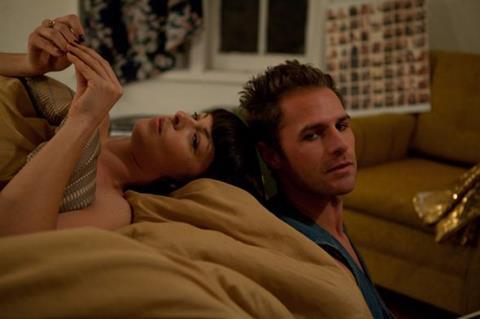 As a musing on sex and relationships US indie Prevertere offers up a few intriguing moments and is interspersed with some engaging performances – especially from the three female leads – though is eventually let down by a lack of precision and style (though budget may be something to do with that) and a niggling sense that it is not quite as clever as it thinks it is.

Best of all is the vivacious Pollyanna McIntosh who breathes real life into her – admittedly playful and boisterous – character.

While the film circles around Templeton (Terry Wade), a less than charismatic man who is juggling three relationships and is never happy, the best of the film comes from those three women (played impressively by Rose Rossi, Antonella Ponziani and Pollyanna McIntosh) all of whom he keeps in metaphorical (and sometimes real) boxes. The film has screened at several festivals (including Raindance in the UK), which would seem its best exhibition avenue.

Templeton and on-off girlfriend JoAnne (Rossi) head to a Las Vegas party at Gino’s (Joey Capone) house where everyone seems to be swaying (or acting-swaying) to barely heard music and where drugs, booze and topless chaps seem to be in abundance.

In flashback he recalls the other two women in his life. Older Italian Shelly (Ponziani) who he lies to – telling her he is a musician and on the road – and will only have sex with her in her flat, and the free-spirited and playful Irene (McIntosh), who he tells everything but who wants nothing from him and is open about her other relationships.

Back at the party , it all descends into druggy delusions and vague panic as Templeton argues with Jo-Anne and eventually finds her in bed asleep with two men. They drive back from Vegas with no sense of resolution o revelation. Just the sense that none of these three women deserve someone so bland and self-absorbed.

Best of all is the vivacious Pollyanna McIntosh who breathes real life into her – admittedly playful and boisterous – character. Messing around in cardboard boxes, dressed as a mermaid or a space princess, her Irene is a vivacious and confident woman. McIntosh is given he most intriguing of the characters in Prevertere and makes he most of her role.