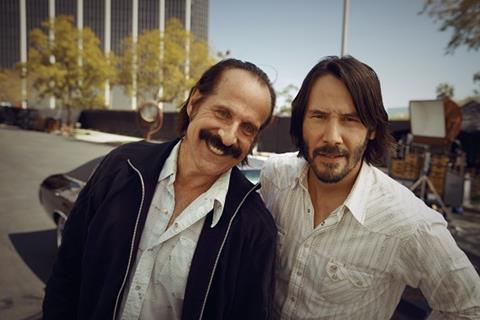 Swedish Dicks is shooting now in Los Angeles and will launch exclusively on Viaplay this autumn. Screen can also reveal the first shot of the Reeves and Stormare on set.

Set in downtown LA, the 10-episode series stars Stormare as Ingmar, a former stunt man who is now working as a small-time private detective. A former DJ (Glans) partners with him in the PI firm.

During the series, one case will be solved per episode, while a longer mystery runs throughout the series.

For Reeves, who will star as Ingmar’s former stunt buddy Tex, the series marks a first foray into live action TV in a recurring role. The actor previously voiced animated series Bill & Ted’s Excellent Adventures in 1990.

Reeves said: “I love how progressive the whole show is. The scripts are amazing and it was great to have the opportunity to work with Peter Stormare again.”

The pair previously worked together on 2005 action-thriller Constantine and will appear together in John Wick: Chapter Two.

Viaplay, the leading Nordic streaming service, is part of the Modern Times Group.

“The fact that we have such a talented list of stars really reflects the potential of this series and the high quality of the production. The passion from Brain Academy and Viking Brothers making this fantastic story come to life will make this into a series you don’t want to miss. We are already seeing a lot of interest from other international broadcast and TV companies and look forward to the premiere on Viaplay later this year,” said Jakob Mejlhede Andersen, evp and group head of programming and content development at MTG.

“The show is a great mix of light and dark humor - both silly and smart comedy which makes it a blast to shoot,” added showrunner Peter Settman.

Among Viaplay’s co-productions are crime series Black Widows, made with MTG’s TV3 in Sweden, Denmark and Norway and Our Time Is Now, a multi-generation drama made with SVT, which is set at the end of the Second World War and follows a family that runs a successful restaurant.