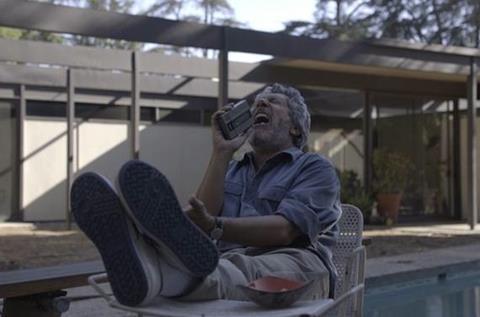 Quentin Dupieux heads into the quirky left-field side of cinema (as usual) with his strange and resolutely odd Reality (Réalité). The director of cult film Rubber (and the less-than-cult Wrong Cops) is an acquired taste to be sure, but even if you don’t like – or perhaps get – his films, you have to admire his sheer ability to get them made.

While the film never really ever fully engages at least Dupieux never pulls back from delivering something original and strange.

Relishing its oddball sensibility, multi-hyphenate Dupieux takes his film into weird territory, and while perhaps not as knowingly tacky as Wrong Cops this new offering is a bizarre hybrid of horror and the surreal. Premiering at Venice, it will please his fans but leave others wondering what is going on.

A French cameraman (Alain Chabat) pitches a terrible idea for a film a distracted producer (Jonathan Lambert), who agrees as long as he can find the perfect groan. Intriguing perhaps, but Dupieux doesn’t take it into particularly interesting territory, instead there are a series if tangential story-threads that have differing levels of interest.

Maybe this all simply reflects Dupieux’s filmmaking manifesto, because just when you think he may be going for a linear story he throws the filmic balls up into the air and sees where they fall.

Some are engaging and oddly intriguing (Jon Heder in a giant rat costume that makes him itch rather a lot, and a little girl who sees a blue VHS cassette in the entrails of a wild boar her father has killed and guts) and others less engaging, and while the film never really ever fully engages at least Dupieux never pulls back from delivering something original and strange. Plus it is a relatively short bit of surreal oddness.