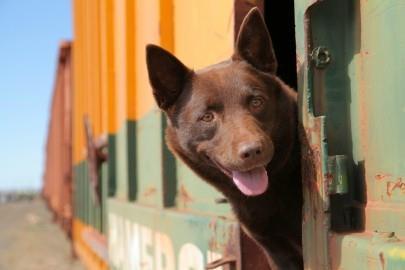 This handsomely shot tribute to an actual canine hero of remote top-left Australia is difficult to categorise. Is it for kids, adults or families? Told by several observers, the narrative is confusingly focussed for kids, perhaps its natural audience; the hearty goodness of the story’s mixed-nationality community of miners makes it a soft sell for adults; families might be nervous of some underclad bedroom activity. Dog lovers, of course, will be wrapped in the adventures of Red, the kelpie with heart and a will of its own.

There’s a bright soundtrack full of 1970s rock, and some snappy graphics include maps of the dog’s fabled wanderings.

After premiering at Berlin, the film has already played several festivals, winning the Audience Award at the Vail Film Festival, Colorado. The presence of Josh Lucas (Sweet Home Alabama, Hulk, etc.) will certainly boost international interest. It releases in Australia on August 4.

Red Dog is convincingly set in 1971 as the iron ore town of Dampier is emerging from tin shacks and caravans. When long-distance truckie Tom (Luke Ford) pulls in to the Mermaid Motor Hotel he finds the assembled miners preparing for the passing of their beloved communally owned kelpie, Red Dog.

Tom hears first from publican Jack (Noah Taylor) and then from several others how smelly, red-dust-covered Red had first hitched a ride into town, eventually choosing Yankee bus driver John (Lucas) as his master. The episodic screenplay by Dan Taplitz is derived from British author Louis De Bernières’ small-scale novel, really a series of vignettes inspired by his visit to the area.

There’s a bright soundtrack full of 1970s rock, and some snappy graphics include maps of the dog’s fabled wanderings: he even hitches a trip to an icy Japan. Cinematographer Geoffrey Hall records some truly remarkable widescreen vistas ‑ other-worldly red landscapes often crisscrossed by never-ending ore trains.