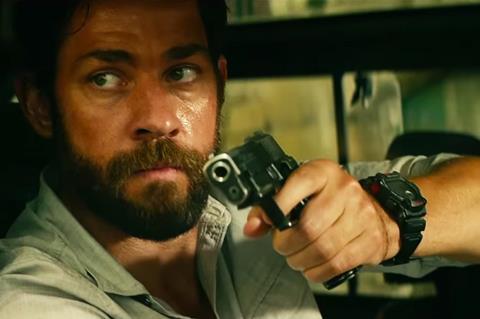 Intense battle action and rousing heroics just about make up for the dramatic shortcomings of 13 Hours: The Secret Soldiers of Benghazi, Michael Bay’s slick, full-on account of the controversial 2012 attack on an American diplomatic compound in Libya. Yet for all the sound and fury, this almost feels like a personal film for Bay. And with no real stars and not a single giant robot, it certainly has much more limited commercial prospects than the director’s world-conquering Transformers series.

Eighteen months after launching the latest Transformers entry, Paramount releases 13 Hours in North America on Jan 15. The studio should be able to tap into the same patriotic domestic audience that made American Sniper a hit, though it remains to be seen how the ongoing debate about the Benghazi attack – in which Ambassador Christopher Stevens and three other Americans died – in a US presidential election year might affect box office performance.

The action will be a selling point outside the US, but the American-centric take on events could be a liability, as it apparently was with recent international under-performers like American Sniper and Lone Survivor.

Based on a best-selling non-fiction book and scripted by novelist Chuck Hogan (also co-creator of TV series The Strain), the film focuses on six elite security contractors working as guards at a covert CIA base near the Benghazi compound.

The story begins with the arrival in Libya of Jack (John Krasinski, most recently seen in Aloha), a family man hoping for a quiet stint at the base. A stiff half hour’s worth of macho banter introduces the other guards – among them Rone (James Badge Dale from The Walk) and Boon (The Gift’s David Denman) – and the base’s CIA staff, including a chilly female operative (Alexia Barlier, from French TV’s Falco) and a wimpy station chief (David Costabile, from Lincoln) who is constantly at odds with his tough-guy protectors.

The film moves much better when the action kicks in as the guards react to a surprise attack on the nearby diplomatic compound. Bay captures the attack with a swooping, kinetic camera that produces an exciting, if sometimes confusing sequence.

After the initial attack, the six guards dig in to wait for an inevitable assault on the CIA base, hoping against hope that a rescue team led by a fellow ex-soldier (Toby Stephens) will arrive in time.

Taking up the last 40 minutes of the two-and-a-quarter hour running time, the siege sequence delivers real tension and some pumping action, occasionally punctuated by awkward attempts to humanise a few of the characters.

The atmosphere is enhanced by evocative locations in Malta and Morocco and eye-catching cinematography by Australia’s Dion Beebe (Memoirs of a Geisha).

While the film clearly takes a soldier’s point of view of the unfolding events, it steers clear of overt political statements and doesn’t indulge in too much US flag-waving. It also makes an effort – mostly in documentary clips inserted before the closing credits – to show that many Libyans were against the attack and mourned all the lives lost.

Screenplay: Chuck Hogan, based on the book 13 Hours: The Inside Account of What Really Happened in Benghazi by Mitchell Zuckoff and members of the Annex Security Team