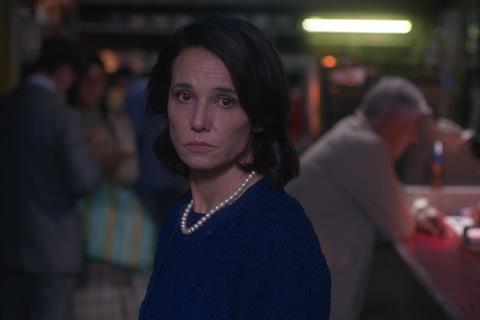 Privilege provides little sanctuary from the realities of daily life in 1976. Manuela Martelli’s impressive debut feature offers a fresh perspective on the nightmares of Pinochet’s Chile as it follows a middle-aged woman’s dangerous flirtation with political engagement. The blend of character study, Hitchcockian intrigue and an excellent central performance from Aline Kuppenheim makes for a tensely involving tale with strong arthouse potential.

Martelli offers a subtle, unobtrusive evocation of Chile in the 1970s.

Martelli slyly convinces us that we know who Kuppenheim’s Carmen is. We are almost invited to judge her. We first see her seated, calmly flicking through a Venice guidebook as a shop worker mixes paint. She seems accustomed to being waited on. She finds a picture of a sunset that perfectly matches the pink she is seeking for the walls of her summer house. This is a woman whose only care in the world is a tricky colour scheme. There is a commotion outside the shop that we see but never hear. As Carmen returns to her car, her attention is drawn to a lost shoe; the last sign of life for someone who has now been “disappeared”.

1976 offers a reunion of sorts for some of the key figures in Machuca (2004) with director Andres Wood now among the producers and Martelli directing her erstwhile co-star Kuppenheim. Martelli offers a subtle, unobtrusive evocation of Chile in the 1970s. Radio broadcasts, newspaper headlines and black and white television images speak of a country in turmoil. The film’s colour palette is one of reassurance; muted browns and warm reds feature in solid old sofas and dark wooden panels. Kuppenheim’s Jackie O elegance and striking wardrobe make a statement of character. Wearing a camel coat, a terracotta blouse, chunky jewellery or expensive shoes, she appears a woman of substance, confident of her place in the world. The success of the film lies in chipping away at that image to reveal the more complex, larger unseen individual beneath.

Carmen has taken charge of the summer house redecoration whilst her husband Miguel (Alejandro Goic) remains in Santiago at the hospital where he works as a doctor. When the family comes to visit one weekend, it is clear that politics is not a fit subject for the dinner table. There is something cosseted about Carmen and close-ups convey the sense of a woman slightly disconnected from the conversations around her and the assumptions of her loved ones. Miguel patronisingly characterises her as a woman with “her head in the clouds”.

Kuppenheim’s pale, impassive features easily convey the impression of a woman with secrets. There is also a weariness in her performance, hinting at someone tired of settling for the life she has. Gradually we see more sides to Carmen. This is a woman who donates clothes to the church and reads to blind people. She finds it difficult to sleep at night and is clearly not without conscience or compassion. She had wanted to study medicine, but such a thing was not possible for a woman. When Father Sanchez (Medina) seeks her help in tending to an injured young man she accepts without asking awkward questions. “Father” Elias (Sepulveda) has been shot in the leg and requires medical attention. Carmen lies to secure some antibiotics and becomes more compromised as she offers further assistance.

A different film might feel obliged to kindle a spark of romance between Carmen and the younger Elias. Martelli keeps the focus on Carmen and the consequences of her decision to act. The final third of an economical film does feel more conventional but is effectively infused with understandable paranoia as Carmen begins to suspect that she is being followed and can no longer trust all the familiar faces around her. Someone could be watching over her, friendly warnings turn sinister and there is a growing awareness of the price to be paid by a woman daring to step out of line.