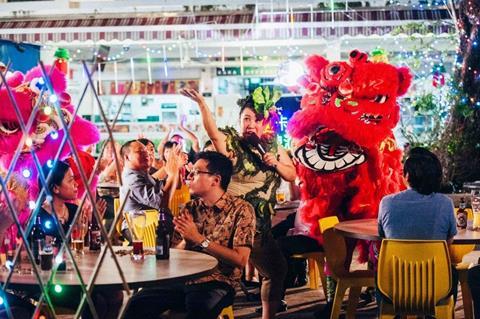 The tonal clashes in the latest from Singaporean director Royston Tan are almost as strident as those in the over-saturated colour palette. A broad comedy about rival meter maids segues into a deeply sentimental tale about the trials of dealing with a parent whose memory is gradually whittled away by dementia. Plus there’s a the uplifting feel-good message about realising cherished ambitions, and a musical number for good measure.

The jaunty tunes that herald comedy are the musical equivalent of an elbow in the ribs and a wink.

If the film doesn’t know what it is, there is little hope that the audience will figure it out. As such, this spirited, but often grating hotchpotch looks unlikely to travel further than Tan’s existing fan base, who are presumably inured to his distinctively chaotic approach.

The setting is Singapore, 2012. Sweet-natured parking attendant Xia Fei Fei (Joy Chua) is devastated by the news of the death of her namesake and idol, Taiwanese singer Feng Fei-Fei. Meanwhile, she finds herself increasingly at odds with veteran rival parking attendant Jenny (Rahimah Rahim) whose ruthless approach to doling out penalties strikes fear into the very hearts of local motorists. But the genuinely scary thing about Jenny is Rahim’s comic-grotesque performance, which is so broad, it can barely fit on the screen.

Fei Fei has other things to worry about however. Her father, dubbed Uncle Radio by the neighbours, has taken to wandering from door to door, wearing just a vest and pants and trying to sell Rediffusion products. It soon becomes clear that Uncle Radio (Michael Tan) is a few transistors short of the full wireless; in his mind, he is still doing the job he gave up years ago.

Uncle Radio is not the only one who is living in the past. The fascination with Feng Fei-fei, which is shared with local cafe proprietor Luan (Ling Ling Liu) and her freestyle rapping son Yo Yo (Shigga Shay), harkens back to a simpler time – Feng Fei-Fei was at the height of her fame in the 1980s. And modernity and development threaten the lives of all of the characters in one way or another: Fei Fei and her fellow parking attendants are about to be replaced by automatic machines.

Now in her late 30s, and soon to be unemployed, Fei Fei grabs destiny with both hands and enters into a television talent show. She hopes to realise a long-cherished dream to be a singer and earn enough money to pay her father’s medical bills at the same time.

Luan is even more strident as a character than Jenny the evil traffic warden. Delivering pantomime dame-style comic relief, she appears in a series of increasingly outlandish costumes, all of which are intended to promote the food she serves in the cafe. The performance consists of much eye-rolling and shrieking. The lack of subtlety in the acting is matched elsewhere in the film. The score continually signals the emotional pitch of the scene: the jaunty tunes that herald comedy are the musical equivalent of an elbow in the ribs and a wink.

Easier to endure is the back catalogue of Feng Fei-Fei, which is sweetly performed by Xia Fei Fei in the competition. The Taiwanese star’s music might be the biggest selling point of this unashamedly nostalgic picture.