'A Boy And Sungreen': Busan Review 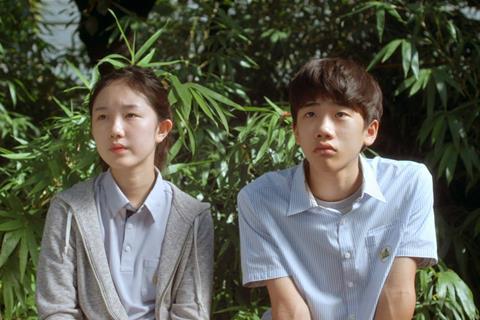 Ahn Ju-young’s comedy-tinged approach to a story about the firendship between two high school students and the search for the father of one of the boys is a welcome addition to the ever-increasing number of Korean independent films focussing on the younger generation. Although it never takes itself too seriously, Ahn’s affecting feature debut is hampered somewhat by a poorly executed climax.

The film is well-cast, with standout performances from young leads Ahn Ji-ho and Kim Ju-a

Produced by the Korean Academy of Arts (KAFA), which has trained and nurtured some of Korea’s most iconic filmmakers such as Bong Joon-ho, A Boy And Sungreen might prove to be more successful at home than overseas given that it is tailored for local audiences. Still, premiering at the Busan film festival will give Ahn some exposure, alothough his approach doesn’t break any new ground.

The film follows best friends Bohee (Ahn Ji-ho) and Nokyang (Kim Ju-a), who both share something in common: they have been raised by single parents. Bohee (the titular “boy”) was told by his mother that his father was killed in an accident but, after he begins investigating with the help of the affable Nokyang (“Sungreen”) whose mother died during childbirth, he learns that his mother might be lying. His search takes him to a half-sister who is actually his cousin, and he forms a close relationship with her boyfriend Sang-ok (Seo Hyun-woo), filling the gap left by his absent father.

As the title suggests, however, at the centre of the narrative is the friendship between Bohee and Nokyang, and the unbreakable bond they have with each other. This all works very well, and it’s a shame the climax revealing what happened to his father lacks the attention paid to the rest of the film. It’s both clumsy and contrived, which might come as a disappointment for some audiences.

The film’s leading characters are well-developed with tangible chemistry among the leads and supporting roles that infuse the narrative with affection, humour, and energy. In this regard, the film is well-cast, with standout performances from young leads Ahn Ji-ho and Kim Ju-a. Seo Hyun-woo, meanwhile brings some charisma to his role as an older brother figure. Production values are generally quite strong except for in some of the film’s final stages where the going gets choppy.