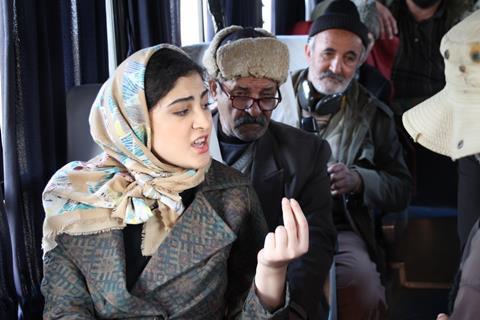 Guilty secrets and the slow turn of social attitudes provide the weighty backdrop to an airy comedy in Reza Jamali’s Ealing Comedy-esque A Childless Village (Sonsuz). Jamali mines a good deal of humour from affectionate, mild-mannered jabs at guerrilla moviemaking in the film-within-a film structure. The picture postcard Azerbaijan setting greatly enhances the visual appeal of a modest, old-fashioned charmer that should travel further on a festival journey that began at Tallinn and continues with the Red Sea Film Festival.

Jamali’s second feature reunites him with a number of key collaborators from his debut Old Men Never Die (2019) including producer Salman Abbasi and lead actor Hamdollah Salimi. A Childless Village unfolds in a remote mountain village where, twenty years previously, the now elderly Kazem (Behrouz Allahverdizadeh) shot a film  confronting the area’s infertility and laying the blame squarely at the feet of the local women. Those women stole the film and burnt it, but the damage was done. Dishonour and divorce followed – but even men who remarried have not been able to sire a child. It is only logical to now conclude that the real problem lies with them.

Kazem is intent on making amends for past assumptions by directing another film about the men and their infertility. He is helped in this task by the equally elderly Moslem (Salimi) who is desperate to become a filmmaker in his own right. He has all the lingo, from his talk of a “sequel”  to the promise he makes to the villagers of a surefire ”international” hit.  Initially, he seems content with the honour of operating the clapperboard and taking instruction from Kazem who spends most of the film framing his shots through the arch of his spread palms.

Persuading anyone to take part in the film is the first obstacle the duo have to overcome. The comedy comes from all the ways in which enthusiastic amateurs innocently sabotage Kazem’s plans. Sound recordist Samad (Safat Ahari) is reduced to laughter (and sometimes tears) by the stories he hears. Moslem is often in shot, gurning at the camera or in the background as he stretches to pick some low-hanging fruit from a tree. He mischievously moves a pane of frosted glass that has been used to protect the identity of one man who does not want to appear on camera. Evem Jamali himself gets in on the act, with the occasional move from behind the camera and into the frame.

A Childless Village is genial enough but, for a film trying to make amends for the past treatment of women, it has few female characters of any depth. A succession of village women are lined up to briefly recount their stories to Kazem’s camera. The one woman with any real presence in the story is known as Miss Doctor (Maryam Momen), who provides medical services for the village and a good deal of common sense to counteract all the superstitions, pride and prejudices that are prevalent. She is the one who eventually ushers a group of men to town for tests that will finally resolve the issue of their fertility.

Salimi’s Moslem is an incorrigible mischief maker and Momen gives Miss Doctor the fire and presence of someone bringing a breath of modernity to a village in need of change. The real star however is cinematographer Abdollah Shokri, who deserves special mention for the way in which he brings out the natural beauty of the location. The snow-capped mountains, tranquil blue skies and lush green pastures dotted with waves of herbs all look highly inviting. In collaboration with Jamali, he shows a great eye for places and faces; not least in regular trips to a stone-walled village cafe filled with steaming tea urns, bubbling shisha pipes and a gallery of gnarled, wary regulars.