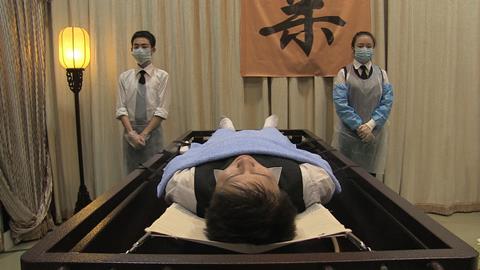 Tending to the dead on a daily basis makes a trainee mortician more appreciative of life in Almost Heaven, a gentle, discreetly observed documentary. The potential here is considerable but director Carol Salter settles for a respectful, ultra low-key approach that doesn’t do full justice to the subject matter. The film feels too modestly proportioned to warrant theatrical interest but the glimpses into an unfamiliar world should be enough to secure attention from specialist documentary channels.

It seems that Salter wants to make events appear as banal as possible to remove any sense of taboo about death.

Sparse opening titles provide a rare element of context as we are informed that China provides few job opportunities for teenagers, obliging many youngsters to travel far from home in search of employment. We then meet Ying Ling, who is working as a trainee mortician at Spring In Heaven, one of the largest funeral homes in China. The camera observes the clinical corridors of a vast, anonymous house of death that could easily see service as an underground set for a James Bond film.

We don’t know where Ying Ling has come from or what led her to work in a funeral home. In one telephone call to her family, they discourage her from returning home to gather some winter clothes and are equally unprepared to dispatch them to her. She remains a remote figure even as we gain a smattering of further information including the confession that her dream is to learn martial arts and become a bodyguard or a policewoman.

Working at the funeral home and residing with other morticians in the basement, Ying Ling is portrayed as lonely and isolated. There is little interaction with other people and we learn nothing about her fellow workers in the home or how long the training takes.

She eventually finds a friend in fellow mortician Jin Hau. He is gawky and goofy and their teasing, giggly friendship is one of the sweetest elements of the film. A trip to a fast food outlet or a games arcade reminds us that they are just typical fresh-faced teenagers who sometimes feel as if they are playing at being grown-ups.

Almost Heaven is good at capturing the rituals and practices surrounding the dead. The morticians learn to treat the corpses with dignity and respect, deal with distraught relatives and progress in their training from working with dummies to student volunteers and then real corpses.

Salter shows her own respect for the process and never allows the camera to feel intrusive as she delicately observes the way limbs are washed, faces are shaved and the morticians are encouraged to say kind words to the dead as they go about their business. It seems that she wants to make events appear as banal as possible to remove any sense of taboo about death.

There is a sense of structure to Ying Ling’s story as she journeys from nervous novice to someone who is capable of conducting a service in front of a grieving family and the film’s conclusion will bring a smile to the face. There remains a lingering sense, however, that more context and a scope that extended beyond the narrow focus on Ying Ling might have resulted in a more substantial and accessible film.