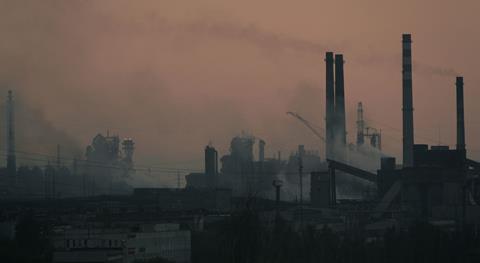 Crocodile Gennadiy is a powerful, meaty documentary set between 2000 and 2015 and shot by Steve Hoover (Blood Brother) in the Ukrainian city of Mariupol, now a strategic prize in the conflict with Russia. Centred around a controversial, vigilante pastor who abducts homeless, drug-addicted children who are living rough and brings them to his Pilgrim Centre for treatment (often adopting them himself), it ploughs a fairly neutral line through a swarm of huge issues. Hoover wants the viewers to come to their own decision about Pastor ‘Crocodile’ Gennadiy and his mission, even as the world he has forcibly tried to put right spins further and further out of his control.

Gennadiy, though, clearly has a messiah complex. He has adopted 32 children and has three of his own, mostly boys

Assembled from archive material and footage shot by Hoover and his team in Mariupol, Crocodile Gennadiy is, at times, a handsome-looking film, the smoke belching from Mariupol’s Soviet-era industrial landscape providing a beautifully brutal backdrop to the poverty of the lives lived in the shadow of the giant steel factories.  Gennadiy Mokhnenko, the pastor, goes by the nickname of ‘Crocodile’ after the hero of a Soviet-era children’s animated show, a Russian Kermit who sets the world to rights. Clips from the amateurish TV series give the only real clue of what director Hoover feels about the real-life events playing out on screen. They’re certainly shocking.

Executive produced by Terrence Malick, Crocodile Gennadiy starts in Mariupol with a young girl, her face battered and swollen beyond all proportion, being brought by Gennadiy to hospital in his bare-bones paddywagon. She’s an intravenous drug user, like all the children who litter Geddadiy’s centre, their thin arms festooned with trackmarks and their lives beyond squalid and hopeless. “You just can’t walk past a kid living on the street, you just can’t,” says the pastor in his broken English. “You don’t need permission.”

Crocodile Gennadiy doesn’t follow an identifiable arc; Hoover seems averse to this kind of documentary construction, plus events have over-taken any sense of being able to tack a crafted ending onto this film. Gennadiy labours in the shadow of the dissolution of the Soviet Union and the collapse of any form of social care: the fallout has bankrupted the poor people of Ukraine, financially and morally. He hopes for a better day, all the while as we know it isn’t coming. He works out obsessively, washing himself constantly, swimming against the tide. The film hops backwards and forwards in time, between the children and their desperate circumstances, and the intense Gennadiy himself, a man from another time.

Some of Crocodile Gennadiy’s sequences are almost too tough; a wide-eyed child who dies painfully (the children shoot up Tramadol, sold over the counter by corrupt chemists); an interview with the woman who gave him the drug. There’s Kolya, whose mother is dead and whose father is about to die from drug abuse; a deaf and mute addict who says she has been raped and cannot remember where her baby is. The worst, possibly, is an alcoholic mother who prostitutes herself for vodka and tells her desperate, wailing daughter that she has to leave because she needs to look after the cat. It’s no wonder the pastor has turned to Dostoyevsky for answers.

Gennadiy, though, clearly has a messiah complex. He has adopted 32 children and has three of his own, mostly boys. He knows he has no legal right to forcibly remove these children from their squalor. He’s the product of two alcoholic parents himself, and he’s clear with the boys that he wants to be a father to them. “Stay with us, you’ll grow up to be a person,” he tells one. “I’ll try to be a father to you.” He’s tough and soft-hearted at the same time and clearly fond of the camera.

Although the film becomes buffeted by events which are outside Hoover’s control, Crocodile Gennadiy is one of those rare documentaries which make a mark.  Supported by IFP, the Independent Filmmakers’ Project, it may well face further editing as matters in Mariupol come to a head. With notable camerawork from John Pope and sympathetic editing from Hoover himself, it’s a rich and complicated film. “I hope my life makes a mark,” says Gennadiy, who attacks these problems as if he could physically force them into retreat. He can’t. But this film will make you think about them, and him.