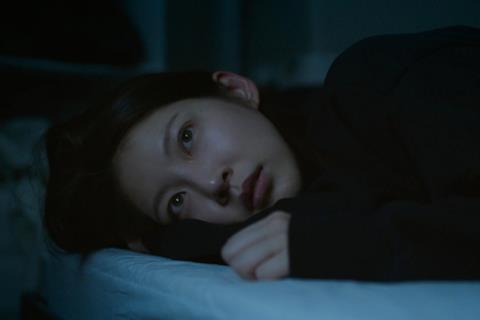 In her feature debut Aloners, South Korean writer-director Hong Sung-eun does pretty much what the English title promises – offers a diagnostic sketch of modern urban solitude. But if there’s something rather programmatic in the film’s intent, Aloners transcends its limitations through acute character observation, impressive directorial control and a strong performance from lead actress Gong Seung-yeon. Overall elegance and the eminently global relatability of its themes should keep the film’s profile buoyant following festival screenings in Jeonju and San Sebastián.

Also making her feature debut following numerous TV roles, actress Gong Seung-yeon plays Jina, a woman in her 20s working in the call centre of a credit card company; a typically soulless place belying the corporate slogan that urges, “Happy Your Life!” Super-efficient at her job, and seemingly undistracted – even unaffected – by the very recent death of her mother, Jina immerses herself in her mobile phone and earbuds when not coolly dealing with the needs of cantankerous, demanding and sometimes just plain deranged clients. Meanwhile, she’s keeping tabs on her grieving father (Park Jeong-hak) – albeit from a very chilly distance – by watching him on the webcam she secretly installed in the flat of her long-divorced, but later reunited parents.

Meanwhile, Jina’s world-weary boss (a nicely tart characterisation by Kim Hannah) announces that she’s charging Jina with training a new recruit to the office – a naive young woman named Sujin (Jung Da-eun), whose eager friendliness towards Jina doesn’t exactly get a warm welcome. Sujin’s talent and, professionally, her fatal flaw, turns out to be her empathetic warmth towards such difficult customers as a disturbed man who claims he has built a time machine to take him back to 2002, and wants to know if his credit card will work in the past.

Tempered by occasional outré touches like these, Aloners otherwise stays in a mode of downbeat everyday realism, given a touch of stylisation by elegantly, cleanly framed photography, which allows the film to balance delicately between modes of psychological drama and borderline black comedy. The analysis of the routine drabness of call centre life comes across as true to life, not least in the sullen, at-it-too-long efficiency of Jina’s boss, and in little touches like the recurrent bleep on the phone that novice Sujin hears but that Jina no longer does, deaf to it through force of habit.

At the centre of the film is a captivatingly elusive performance by Gong, who goes through Jina’s actions suggesting at once a woman hypnotised by mechanical everyday routine, and someone who has done everything in her power to erect barriers between the world and herself. The film gestures towards a certain moral, indicating certain necessary measures for resisting the soul-eroding effect of contemporary urban capitalism – i.e. connect with strangers, care for your family and don’t neglect the dead, either. The message is sometimes too bluntly conveyed: as in a news item about “more and more people failing to find their places in society.” Nevertheless, a low-key open ending means the film is kept sharp, and quietly affecting, all the way through.