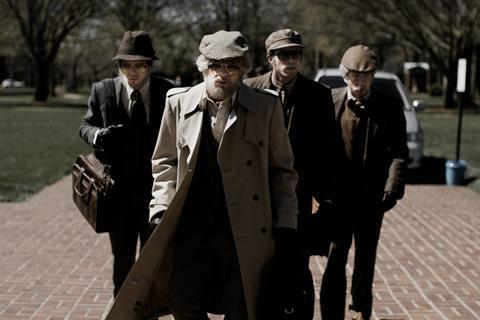 Writer/director Bart Layton (The Imposter) picks up the heist film and hurls it into new territory with American Animals, a supremely-crafted doc/fiction hybrid which is genuinely innovative, pleasingly entertaining and deliciously more than the sum of its parts.

It’s rare to see a film which genuinely breaks new ground, which is why the picture should be embraced with glee

A buzzed-about title in advance of its Sundance screening, American Animals will test the 2018 market; this is a film which will be desired by all and should play well on all levels – festival, theatrical, streaming – but at what price? A potential Point Break or Fight Club of its generation, it arrives in a different commercial landscape; it’s a game-changing film which demands the same in support to make the impact it deserves.

Craft is outstanding on all levels here; from the intricate jigsaw of the fact/fiction script through to acting, lighting, design and, most confidently, the edit. Layton and DoP Ole Bratt Birkeland frame a world which is both seductive and fraught as four middle-class college boys plan a theft from a Kentucky university library in 2004. Starting off as a fantasy, a film drama of their own making, it nudges itself ever-closer towards “crossing the line” into a reality where nobody knows what might lie on the other side.

Layton works on multiple levels: we have the testimony of the men today providing a counterpoint to the drama, which is often repeated from the differing perspectives of the principals involved. Actors Evan Peters (X-Men) and Barry Keoghan (The Killing Of A Sacred Deer) are a combustible combination as the two instigators of the heist, with their real-life characters Warren and Spencer providing commentary and recollections from the distance of today.

Warren is the “spice in the soup”, a college wild boy on a sports scholarship yearning for adventure. He’s the type of guy who has a cartoon tattoo of a T-Rex trying to switch on a ceiling fan; ridiculous, but funny and oddly compelling. Spencer, meanwhile, is an art student dismayed at the lack of any substantial drama in his life as he comes within hailing distance of adult reality in Lexington, Kentucky. Both have been told how special they are growing up but, like most of us, they’re not.

It’s always interesting to watch the real Spencer and the real Warren “interact” with their onscreen characters: both actors are charismatic in their roles, with Keoghan more intuitive and Peters frequently explosive. You can see how they capture the essence of their real-life counterparts.

The beauty of the film comes alive with their target: the exquisite, valuable books which rest inside a sealed room at the university library, guarded over by middle-aged archivist BJ (Ann Dowd). They want to steal John James Audubon’s vividly-illustrated ’Birds of America and a rare copy of Darwin’s On The Origin Of The Species, the text of which provides the film with its title. The delicate and often savage images in Aubudon’s book provide a rich motif and a strong colour palette for the film, while the sealed atmosphere of the library is a soundless Rubicon which these kids will choose to cross.

Layton bridges documentary footage (consisting solely of interviews) with carefully-constructed heist tropes – the boys plan their crime by watching films about robberies, and call each other Mr Black, Mr Pink, etc. This meta-aspect gives the film a thrilling edge with viewers not required to suspend disbelief but instead buy into the shaded nature of reality, Rashomon-style. As the boys edge further along their plan, they bring two more players into the fold; Eric (Jared Abrahamson) is bored with his accountancy course, while Chas (Blake Jenner) is purely motivated by money.

Layton uses his documentary background to give himself an entrée to fiction and crosses the line himself with ease, reversing the fact/drama thrust of experimental Bafta-winning Imposter into drama/fact. American Animals requires many cuts and perspectives which are second-nature to an accomplished documentarian, yet the drama here also seems effortless and seamlessly integrated. It’s rare to see a film which genuinely breaks new ground, which is why the picture should be embraced with glee by low- middle- and high-brow crowds, Layton proving in the process that the heist drama is the cinematic gift which just keeps on giving.