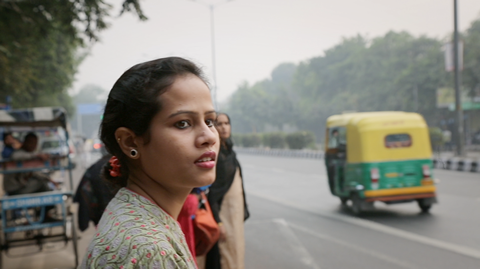 The 2012 gang rape and murder of a 23 year-old physiotherapy student on a private bus in Delhi shocked the world. The case shone a spotlight on the state of women’s rights in India and left many questions surrounding how such a thing could happen. The response of veteran filmmaker Deepa Mehta is a disappointingly heavy-handed docudrama-style production based around improvised fictional life stories for the men who committed the assault.

Mehta further challenges the viewer by her aesthetic choices

Mehta’s reputation should ensure festival screenings for Anatomy Of Violence but it is very much a ragged, experimental piece, lacking the depth of insight or complexity that might have given it any commercial hopes.

Mehta worked with theatre artist Neelam Mansingh Chowdhry and a group of actors on a two-week workshop improvising stories around the personalities of the men responsible for the rape. In a nod to Dennis Potter’s Blue Remembered Hills, the adult performers play the characters as children of seven or eight. One of the problems for the film is that the scenes they have created feel exactly what they are - improvised acting exercises that are sometimes hard to take seriously. They alienate and distance the viewer rather than providing a helpful means of beginning to understand the men.

Mehta further challenges the viewer by her aesthetic choices. Anatomy Of Violence was shot on video in natural light using agitated hand-held camerawork. Exteriors appear to have been shot on the street where bystanders seem to casually watch the action unfold and occasionally stare into the camera.

A flat voice-over narration laconically introduces each individual: “This is DInesh, none of us like him”. The lives of the characters, all fictionalised and using none of the real names, are imagined in boyhood attacks by predatory relatives, broken homes, poverty, actions that perpetrate a cycle of abuse and situations that cause them to fear and resent women. It is a depressing picture of a staunchly patriarchal society populated by men with an arrogant sense of entitlement, an in-bred misogyny, a sense of sexual frustration and a belief that women are there to serve their needs and keep their homes. Much of this may be true to life but the fabricated stories all feel infused with cod psychology.

Mehta also imagines the life of the victim, here called Janki Bisht. In a golden glow, she is shown as a happy, hard-working young woman who has caught the eye of her boss. She has a future full of possibilities. Virtually her every appearance ends on a frozen frame of her glowing smile. She is even heard to say “I’m very proud to be a girl in India today”, displaying the kind of sledgehammer irony that tends to be indicative of a well-meaning production.

Anatomy Of Violence is hard work for the viewer but there are some rewards in the final third. Scenes in which the guilty men share out the spoils found among the effects of their victim are genuinely chilling. When Mehta starts to address the sense of outrage that swept around the world, the film comes alive. Ironically, glimpses of newsreel footage from 2012 evoke a sense of anger and injustice in a way that has been absent from the rest of the running time.

The final improvised moments focus on one of the attackers facing the prospect of death by hanging for his crimes. His cold, matter-of-fact approach to what he did and the belief that the girl was as much at fault as her attackers has an impact never found elsewhere in a muddled and frustrating film.