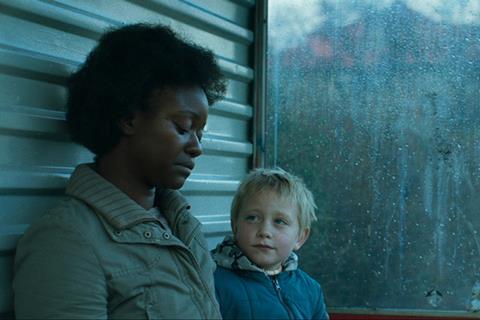 Delivering on the promise of writer/director Uggadottir’s award-winning shorts, it should secure extensive festival berths and modest international sales following its Sundance play.

Deserving of comparisons with the films of the Dardenne brothers or the Ken Loach/Paul Laverty collaborations, And Breathe Normally is all the more impressive for its refusal to inflate drama into melodrama. Circumstances and situations are carefully observed and presented to the viewer without any need to tug at the heartstrings. Uggadottir also secures sympathetic, naturalistic performances from her cast that help to draw the viewer into their lives.

Lara (Kristín Thóra Haraldsdóttir) is no stranger to struggle. We first see her short of money to pay for her supermarket shop. A single mother, raising her son Eldar (a delightful, scene-stealing Patrik Nökkvi Pétursson), she is faced with mounting debts and diminishing resources. Hope arrives in the form of a job with the passport service at Keflavík airport.

It is only Lara’s vigilance that spots the false passport of Adja (Babetida Sadjo), a female refugee from Guinea-Bissau who claims to be French and travelling alone to Toronto. Adja is detained and disappears into a system with rules, procedures and regulations that must be followed regardless of personal sympathies. You are left with the sense that Lara regrets her intervention almost as soon as it has been made.

In such a small community, it seems inevitable that the two women will meet again and the events that nudge them together are plausible. The more the story unfolds, the more we gain a better understanding of who these characters are and what they have endured to try and build a decent, secure family life. Major revelations are handled with subtlety and discretion.

Set in a bleak, chilly Iceland where you can hear every howl of wind and splatter of raindrops, And Breathe Normally touches on a number of issues from the treatment of refugees to LGBT rights. It carries those concerns lightly, however, and remains solidly focused on the two women.

Kristín Thóra Haraldsdóttir paints Lara as a woman intent on doing the right thing even though it could be easier for her to simply walk away or ignore a situation. Lara is imperfect and makes some questionable decisions but we never doubt her good heart. Initially, Adja is a less well-defined, more mysterious figure. Babetida Sadjo plays her with dignity and a sense of someone who has learnt the wisdom of keeping her true feelings under wraps. Adja is careworn but unbowed and has retained her compassion for others. It is the innate decency of both women under trying circumstances that cements the bond between them and lends the film a warming sense of hope.