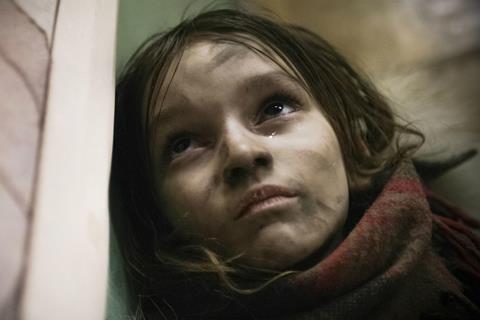 A remarkable central performance from a six-year-old child carries pretty much the entirety of this nail-biting tale of wartime survival. Marta Kozlova is quietly devastating – quite literally, as she speaks not a single line of dialogue – in the role of a girl who regains consciousness in the mass grave in which she and her Jewish family had been interred. She manages to escape from the government official to whom she is handed over and hides in the chimney of a school building which has been requisitioned by the Nazis. The child’s eye view brings a fantastical and sometimes bizarre quality to this lean, urgent story of resourcefulness born of desperation.

Marta Kozlova exudes the feral focus of starvation, but more satisfying is the humanity and personality which creep into the performance

The attractive combination of a mesmerising child protagonist and a take on the WWII genre which feels genuinely original should ensure distributor interest as well as further festival bookings. With critical support and word of mouth momentum, this feature from Alexey Fedorchenko, who previously found success with the multi-award-winning Silent Souls, could garner healthy arthouse returns.

The story takes place in Nazi-occupied Ukraine, in November of 1941. A black screen hides the carnage that is suggested by the sounds of gunshots and guttural orders. The sounds fades and gradually the camera scours the ground, first finding bone-white fingers partially buried, then another body part, and another. Just as the scale of the slaughter begins to sink in, the camera catches a hint of movement. Anna, naked, but for a pair of thin cotton drawers, crawls out from under the bodies of her family and weeps, her twig arms wrapped around the leg of her dead mother. It’s a stunning opening sequence. Harrowing, certainly, but also visually arresting.

Fedorchenko’s lens finds equally striking details later when the girl is hiding, perched on a narrow, soot-crusted ledge, inside a generous chimney breast. A crack in the masonry lets a beam of daylight slice through the dirty air of her hideaway; she prises open the hole and gains a secret vantage point through which she can view the various people who use the room.

At night, she slips out from her chimney, in search of sustenance. Fedorchenko captures her reflection in cracked glass and grimy mirrors; there is a ghostlike quality to this ragged figure, with her huge dark eyes and strings of matted hair.

Kozlova exudes the feral focus of starvation, but more satisfying is the humanity and personality which creep into the performance once Anna has clawed her way back from the brink. She collects discarded items which take her fancy – a flag, a vase, a papier mache man’s head, pictures torn from books – and gradually makes her hiding place into a home. And she makes a friend – a moth-eaten cat which prowls the building.

The child’s perception extends to the time frame. It’s not entirely clear how long she spends concealed but, heralded by a piano motif that sounds like icicles, the bitter winter draws in. Anna takes her revenge on a stuffed wolf which scared her during a visit to the attic, fashioning its skin into a makeshift fur coat.

That the story is left open-ended makes the film’s conclusion no less powerful. Anna cries only twice in the film — the first time, her grief makes her vulnerable; the second time, it makes her dangerous. And with that, perhaps, Fedorchenko leaves us with hope for her survival.