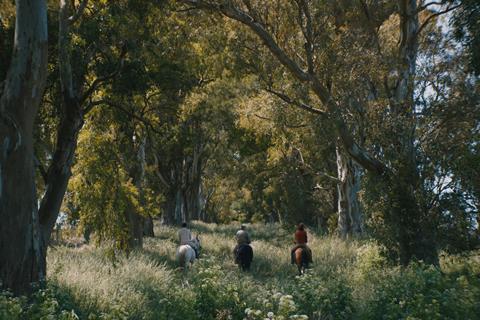 Argentina, 1980. Private banker Rene Keys has abruptly disappeared, leaving behind him nothing but a swirl of unsavoury rumours. But the question which preoccupies his business partner and fellow Swiss banker Yvan De Wiel (Fabrizio Rongione), newly arrived in Buenos Aires, is not the whereabouts of his colleague, but how to gain the upper hand in a tacit rivalry which persists between them, even when Rene has vanished. The striking feature film debut from Andreas Fontana brings a prickly thriller sensibility to the closed world of high finance and a piquancy to the phrase ‘dirty money’.

Fontana crafts a sense of unease and uncertainty which unfolds amid hushed rooms and oppressive luxury; he captures the taint of wealth and privilege in a way which shares a blue-blooded kinship with the work of Lucretia Martel. Azor’s world of murky elitism is one which is little seen in cinema; the milieu is distinctive enough – and persuasively realised enough – for the film to enjoy a healthy festival run following its premiere in Berlin’s Encounters strand; arthouse distribution is also a possibility.

Fontana anchors his story in a particular space and time with the use of an electronic harpsichord on the score – it’s a sound which practically screams retro-intrigue. Glimpsed through the window of the limousine which ferries Yvan and his wife Ines (Stéphanie Cléau) to their hotel, two young men are stopped at gunpoint by military police. Ines appraises the situation and smokes inscrutably, something she does rather a lot during the course of the film. And while it is through Yvan’s eyes that we trace the spreading stain of his bank’s connections, from high society to the gutter and the military junta, Ines seems to be a figure of considerable influence behind the scenes. She councils her husband to wear “something more tacky” in order not to intimidate the bank’s clients, who are understandably jittery at the sniff of scandal following Keys’ disappearance. And she snaps her irritation at Yvan when it looks as though he might lose some valuable business. “Father was right. Fear makes you mediocre.”

Yvan, meanwhile, is more difficult to pin down. His is a shapeshifting character, which absorbs the traits of those he meets and reflects them back, a flattering mirror of a personality. This, together with the veneer of entitlement which comes with inheriting the family’s bank, means that Yvan fits easily into the drawing rooms of the ultrawealthy, alongside their bronze statuettes and heirloom tapestries. It also helps that he doesn’t ask the wrong questions – not that he needs to. The upper classes of Argentina seem inordinately fond of gossip, and will drop rumours for favours as casually as they tip a maitre d’ for the best table.

The look of the film is suitably monied – the gilded palette evokes cognac and well-handled bank notes; the locations are wood-panelled and mostly insulated from the political upheaval which is churning up the country outside this inner circle. But Yvan must ultimately follow the money and the money is drawn to the power of the men with guns. And while Yvan may find himself laundering the blood money of dictatorship, at least he might yet win his unilateral battle of influence with Rene Keys.

International Sales: Be For Films info@beforfilms.com