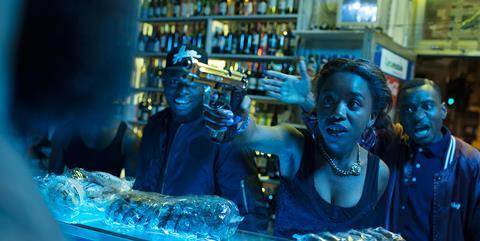 A classic tale of star-crossed lovers is given a bruising, urban spin in Black, an impressive drama set in the gang subcultures of Brussels’ immigrant communities.

Firecracker chemistry between the two leads makes this doomed Romeo and Juliet romance all the more tragically persuasive.

The film arrives in the main competition of the Tallinn Black Nights Film Festival in the week following a domestic release that was greeted by rioting teenagers protesting the film’s sixteen certificate. Having already won the Discovery Award at Toronto, a warm reception on the festival circuit is assured. And a healthy theatrical life seems highly likely, both among young francophone audiences familiar with the source material - two gritty young adult novels written by Dirke Bracke - and the arthouse audience that connected with the similarly themed Girlhood last year.

While both Black and Girlhood explore the role of gender and perceived female roles in urban gang culture, Girlhood’s focus on the empowerment of female friendship gives the film a core of hope. The world we see in Black, however, is a relentlessly bleak place for a young woman. The opening shot sends an unequivocal message: the camera is trained on a wire mesh fence behind which, out of focus, several figures brutally assault a female. None of this is clearly seen, but the screams on the soundtrack make it fairly clear what is going on.

Fifteen-year-old Mavela (newcomer Martha Canga Antonio) is a new face in Black Bronx, a brutally misogynistic gang composed of young men and a few women of African descent. She was introduced to the gang by her cousin, mid-level gang member Notorious (Théo Kabeya), and this, for the time being, is enough to protect her from the harsher realities for girls in the gang.

The accepted code marks female members out as gang property, to be used and discarded at will. One of the girls, Doris (Ashley Ntangu), who has fallen foul of this code warns Mavela, “Be careful. Be very careful. It’s not a game.”

But, initially at least, Mavela is still a child who clearly doesn’t fully comprehend the implications of the world she has entered. Which is why, when she meets Marwan (Aboubakr Bensaihi), the cocky, charismatic younger brother of the leader of a rival Moroccan gang, the 1080s, she falls in love, with little thought for the consequences.

We are introduced to Marwan when he snatches a bag, triggering a breathlessly kinetic chase sequence across Brussels. He escapes, but is brought into the police precinct later on. It’s there that he and Mavela first meet.

But Marvela’s childhood is about to come to an end, extinguished by two unflinchingly depicted gang rapes. She plays a role in setting up the first, of a girl affiliated to the 1080s, and she is the victim of the second – retribution for her relationship with Marwan. She emerges from these experiences a different person. Counter-intuitively the trauma draws her further into gang culture rather than drives her from it. Canga Antonio handles the stark dramatic arc of her character with a depth of emotional conviction which belies her relative inexperience.

Tonally, the picture channels a youthful verve throughout. Robrecht Heyvaert’s accomplished camera work is handsome, without being overly glossy. The constantly moving camera captures some of the nervy energy of adolescence. And the score, while perhaps a little too ever-present, is an interesting blend of tribal drums, North African influences, folk and rap. It’s a quality package which should boost the career prospects of the talents both in front of and behind the camera.

International sales: Be for Films, pamela@beforfilms.com