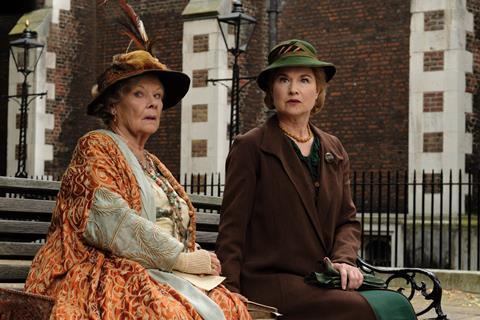 Noel Coward’s 1941 play, already filmed in 1945 by David Lean, and starring Rex Harrison and Margaret Rutherford, is disinterred once again. But Coward’s once spry wit now feels arthritic; his pithy one-liners thud, inert, as lifeless as the first Mrs Condomine (before the inept intervention of Judi Dench’s bumbling Madame Arcati). This is in part due to the age of the source material – Coward’s brand of urbane casual elitism is rather past its sell-by date. But the problems run deeper in this energetic but scattershot version of a property which might have been best left to rest in peace.

Very little of the opulent, extensive backdrop is left unchewed by Dan Stevens, whose performance is pitched at the pantomime end of the spectrum

Originally due to be released by Studiocanal in the UK during 2020, following its world premiere at the Mill Valley Film Festival, Blithe Spirit was subsequently acquired by Sky and will be shown in the UK and Ireland on Sky Cinema. IFC will distribute in the US. It’s a film which will work best with an older audience, a demographic which is traditionally slower on the uptake with streamed releases. The presence in the cast of Downton Abbey star Dan Stevens might be a selling point (director Edward Hall, making his feature directing debut here, is also a Downton alumnus), likewise the assertively Art Deco production design. However the clumsiness of execution in other aspects may hamper the film’s prospects.

Stevens takes the central role of Charles Condomine, a writer wrestling with lack of inspiration as the deadline for the screen adaptation of one of his novels looms ever closer. He shares with his second wife, Ruth (Isla Fisher), a sprawling Art Deco edifice (the film uses the imposing exteriors of modernist gem Joldwynds in Surrey), with manicured gardens and a dedicated writing folly on the far side of the lawn. And by the end of the picture, very little of the opulent, extensive backdrop is left unchewed by Stevens, whose performance is pitched at the pantomime end of the spectrum. Unable to write, Charles becomes fixated on the memory of his glamorous but headstrong late wife Elvira (Leslie Mann), whom he regarded as his muse but, it is later revealed, contributed more than just inspiration to his body of work.

Ruth, Charles and friends seek an evening’s diversion at the show of medium Madame Arcati. The show ends in disaster for Arcati, but Charles spots a potential angle for his script and invites her to his home. Unfortunately, Madame Arcati inadvertently materialises the ghost of Elvira, who embarks on a crockery chucking, drink spiking, brake tampering rampage, with the intention of usurping Ruth and reclaiming her husband, by any means necessary. Ruth, meanwhile, wafts around in drop waisted dresses (costumes are a strong point), petulantly suggesting that Charles’ time would be better served by finishing the screenplay. An added pressure is the fact that Ruth’s father is the big shot producer who has commissioned the work in the first place.

The comedy leans heavily on the device of Charles shouting abuse at his dead wife, who only he can see, and repeatedly causing offence within polite society. An emphatically jovial score, laden with perky little oboe flourishes, does little to help the jokes land. And there’s a curious imbalance to the structure: the film spends a lot of time picking over the feud between the two wives, but relegates Judi Dench’s Madame Arcati to barely more than a footnote.