'Blow The Man Down': Tribeca Review

A fine, feminist noir finds something fishy in small-town Maine 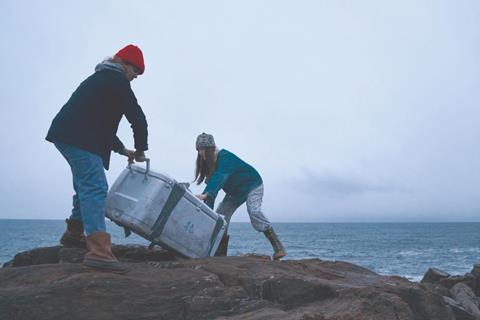 ‘Blow The Man Down’

Welcome to Easter Cove, Maine; a tiny seaport that looks like something out of a tourist brochure, or at least a frozen-food ad for fish-and-chips. The young men haul in heavy lobster pots, the young women are pretty and polite, and the old ladies sip tea from china cups. It all seems quaintly picturesque, even a little dull. Until you look a little closer and see the rot under the clapboard, and the blood on some people’s hands.

Blow the Man Down is also aided by Todd Banhazl’s cinematography, which knows the real palette of New England comprises various shades of slate

Premiering at the Tribeca Film Festival, Blow the Man Down is a refreshingly offbeat noir, one that spices its murder-mystery thrills with a good bit of feminist empowerment. Although it’s perhaps a little too offbeat for wide-release success, it should appeal strongly to younger audiences interested in risky filmmaking, and to sophisticated older ones who’ll appreciate a movie where the AARP generation takes the lead.

Directors Bridget Savage Cole and Danielle Krudy – who also co-wrote the screenplay – announce their fondness for mischievous innovation right at the start, with a group of anonymous fishermen performing a rollicking rendition of the film’s title. The singers will reappear later, and serve as a sort of grizzled Greek chorus, as well as a reminder of the town’s seafaring, macho culture. Their presence is startlingly artificial, of course, but that’s Krudy and Savage Cole’s point – so is this culture. The men do indeed think they’re running things, but that’s only because their indulgent wives and mothers let them. In fact, the whole town is really run by a cabal of sweetly smiling matriarchs, and  quite well, too, until a woman disappears and a man is killed. Then, those nice old ladies decide they need to take a firmer hand in just how things are being done.

The story begins by concentrating on Priscilla (Sophie Lowe) and Mary Beth (Morgan Saylor) Connolly, two young sisters who’ve just finished burying their mother – and beginning to confront a mountain of debts. But gradually the picture widens to include an older generation, and some darker secrets. Like the fact that the town bed-and-breakfast is really a bordello, run by Margo Martindale’s matriarchal Edith. And that although grandmotherly Susie (June Squibb) helped put the house in business, now she’s ready to do whatever it takes to shut it down.

Getting to that point, however, involves several clumsy scenes. As in most mystery films, the plotting and motivations can get a little complicated at times, and the script doesn’t smooth out all the bumps. Characters take a bit too long to develop and their relationships to each other, and the situations they find themselves in, aren’t always immediately clear.

The actors, however, come to the rescue. Lowe and Saylor are perfect as prissy Priscilla and rambunctious Mary Beth, creating a sisterly bond that feels real and unforced. Even better are the veterans filling out the female cast, including not only Squibb and (a particularly ferocious) Martindale, but the always-terrific Annette O’Toole. These women have been giving great performances since before the rest of the cast was born, and this movie isn’t about to break their streak.

Blow the Man Down is also aided by Todd Banhazl’s cinematography, which knows the real palette of New England comprises various shades of slate – roads and rocks, sea and sky. And by the directors’ own, understated good taste, which wisely makes the violence just gruesome enough, while refusing to let the movie’s sex-worker subplot devolve into sleazy scenes and easy judgements.etter than that.