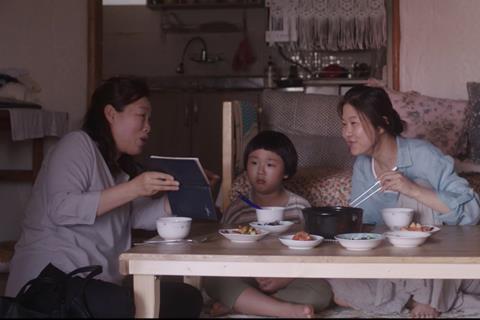 The only hearing member of her family, eleven-year-old Bo-ri sometimes feels left out of the close-knit circle of her deaf parents and younger brother. After being temporarily separated from her family during a crowded firework festival, Bo-ri feels her isolation particularly keenly and wishes that she too was deaf. She decides to take matters into her own hands, first by listening to music at ear-splitting volumes, then by hurling herself into the sea. And when, having been pulled out of the water and hospitalised, she finally wakes, it appears that she too has lost her hearing. Heartfelt in its messages of acceptance, but somewhat naïve in their delivery, this sugary first feature boasts a picturesque backdrop and a cute child protagonist, but tests audience goodwill with its aimless pacing.

The takeaway messages – that real friends are the ones who see the person rather than the disability, and how family love is unconditional – are laudable but laid on a little thick

The film’s well-meaning, if slightly on the nose, approach to disability and difference, together with the child’s eye view of the situation, skews it towards the younger section of the potential demographic. It could be a well-received addition to family-oriented strands in festivals. The languid storytelling might dissuade overseas distributors, but a tighter edit could make this heartwarming picture more of an attractive prospect.

The film’s meandering lack of urgency is one issue, although it could be argued that it captures rather effectively the endless, half empty days of a childhood summertime. But more irksome are the repetitive tendencies of both the screenplay and a score which riffs on the same plaintive acoustic guitar motif at every available opportunity. Writer/director Kim Jinyu has his characters asking the same questions over and over, to the point where it starts to distract from the film’s finer qualities.

Perhaps Bori’s main strength is its persuasively natural depiction of this intimate, affectionate family unit. There are several lovely scenes in which Bo-ri and her father chat together in sign language while he fishes in the sea. And, forced to polish up her signing, she talks properly to her seemingly gregarious, football crazy kid brother and learns that his existence isn’t the carefree whirl of soccer and socialising that she had assumed. More disturbing is the fact that she starts to witness the discrimination that her deaf family members take for granted. Two snooty sales assistants tack on 5000 won to the price of a shirt; Bo-ri, who realises what has happened, is wounded on her mother’s behalf.

Also notable is cinematography, which squeezes every last drop of sun kissed charm from the seaside small-town setting, and in particular, Bo-ri’s modest but welcoming family home. The takeaway messages – that real friends are the ones who see the person rather than the disability, and how family love is unconditional – are laudable but laid on a little thick.