Why did Great Britain vote to leave the EU? Timothy George Kelly’s doc explores the wider issues behind the shock move. 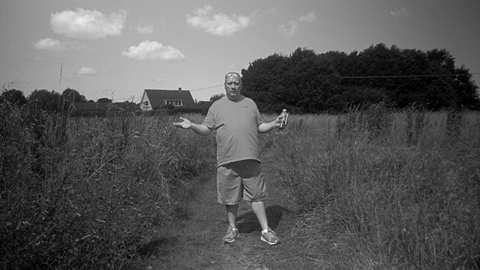 The one certainty in the topsy turvy chaos of British politics is that all roads lead to Brexit. The referendum vote in June 2016 divided the country and sent out shock waves that are still being felt. Brexitannia is a timely attempt to understand the deeper feelings and wider issues behind the British decision to leave the European Union. Fascinating as a state of the nation snapshot, Brexitannia could earn a small theatrical life and further festival screenings in areas curious to discover more about the hopes and fears of a very disunited United Kingdom.

Timothy George Kelly’s documentary is divided into two sections. In the first, a wide selection of British citizens are interviewed about how they voted in the referendum and the reasons why. Photographed in black and white on locations across the land, people talk from back gardens and football pitches, pubs and seashores, fields and parks. There’s a recurring theme of feeling that British sovereignty has been surrendered to the European Union. Who wants to be part of an organisation that dares to dictate the shape of our bananas or the size of our cucumbers?  People express their worries about immigration and the relish with which they seized the opportunity to given the governing elite a black eye. Some are jubilant, others are still shellshocked by the narrow margin of victory for those who decided to vote leave. The constitutional implications for Scotland and Northern Ireland are mentioned and there is a growing sense of the part played by inequality, class and racism in the big decision.

The conversations eventually widen away from specifics to a belief among many that leaving the European Union could be the catalyst for making Britain great again. There is a sense of toxic nostalgia for a predominantly white Britain where heavy industry flourished, jobs were plentiful and British craftsmanship was the envy of the world. Leaving the EU is a chance to reverse the tidy of history and keep the foreigners from our doors.

There are times during the montage of interview clips that you could have placed Elgar’s Land Of Hope And Glory on the soundtrack or at the very least a recitation of a John Betjeman poem. Perhaps it is the sense of impotence that makes a specific vision of the past seem so enticing or the desire to scapegoat foreigners so irresistible. Several of those interviewed remark on the increase in hate crimes after the referendum vote as if they had been legitimised by the decision.

The second, considerably shorter, section of the film is dedicated to “The Experts” - such as Noam Chomsky, Dutch-American sociologist Saskia Sassen and others who offer their views on what the referendum vote signifies. They may talk in more theoretical terms but their analysis echoes what has been said earlier as they explore the failure of neoliberalism, the shift to the right in the political mainstream and discuss the pursuit of nationalism as the end game of capitalism. It is so much easier to blame refugees than take a look at the real sources of oppression and the growing inequalities between rich and poor. Perhaps the Brexit vote was a cry for help from people who feel left behind by the modern world.

The more conventional, talking heads “experts” provide the less interesting section of Brexitannia, lending the film a rather disjointed feel.  Real people are much more compelling and their uninhibited conversations allow Timothy George to hold up a mirror to Britain and reflect back a society with all its warts on display.