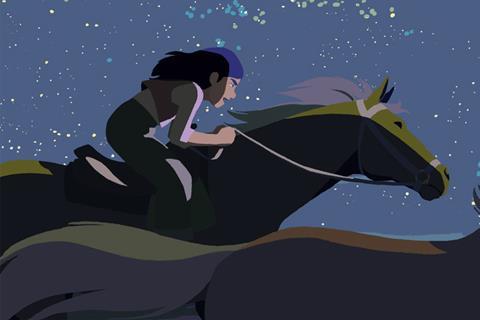 Martha Jane Cannary’s formative years may not have been quite as spirited as animator Rémi Chayé imagines. The frontierswoman’s adolescent experiences might not have hewed so neatly to an empowering narrative, either, and by all reports she was not called Calamity Jane until her twenties. But this family-friendly French-language film about her antics as a 12 year-old in a pioneer wagon train is a vibrant and dynamic delight nonetheless. After winning the top prize at Annecy this year, Calamity should find fans internationally for its resplendent hand-drawn imagery, action-packed story and can-do attitude.

Lest viewers fail to make the connection from its title, Chayé’s first feature since 2015’s Long Way North begins with sprawling plains and twangy tunes — a place for the future Calamity Jane to roam, and a bouncy soundtrack to accompany her adventures. The film’s visuals are rendered in an almost surreal palette of greens, blues, yellows and oranges, as well as pinks, purples and even turquoise, and it is instantly noticeable just how cannily it matches its impressionistic landscape to its subject’s untameable nature.

The film is set in 1863 when, with her father Robert (voiced by Damien Witecka) and younger siblings, Martha Jane (Salomé Boulven) is travelling west. Stern wagon train leader Abraham (Jochen Hägele) approves of neither the Cannary family’s modest social standing nor Martha Jane’s refusal to do what she is told, but he made a promise to Mrs Cannary before she died. When Robert is injured during the dangerous trek and Martha Jane takes the reins (at times, literally), the community makes its  displeasure known.

More comfortable wearing her dad’s pants, teaching herself to lasso and fighting with Abraham’s smarmy son Ethan (Santiago Barban), Martha Jane is already the wagon train’s resident outcast when she meets Confederate soldier Samson (Alexis Tomassian). After he disappears with the camp’s prized possessions, she is blamed. To clear her name, she pursues him . As Martha Jane teams up with light-fingered teen Jonas (Léonard Louf), finds work with gold-mining magnate Madame Moustache (Alexandra Lamy) and makes an enemy of Samson’s Colonel (Jérôme Keen), Chayé keeps the pace brisk, the mood equally determined, upbeat and thoughtful, and his heroine lively and tenacious.

This year has delivered another animated feature about a rebellious girl flouting societal norms and revelling in gorgeous outdoor splendour, via Cartoon Saloon’s Wolfwalkers. The pair will likely end up on different streaming platforms (Wolfwalkers is destined for Apple TV+; Calamity opened in French cinemas in mid-October, before they were ordered to close again), but they would make an enchanting double feature. As was already apparent in Long Way North, Chayé  learned much from his stint working on Cartoon Saloon’s The Secret of Kells, although his visual style here is alluring in its own distinctive way.

Older rather than younger audiences will spy the formula to Calamity’s story, which is Chayé’s first screenwriting credit (with Sandra Tosello and Fabrice de Costil), but there is a crucial forthrightness at the movie’s core. Each narrative development underlines the restrictive expectations placed upon 19th-century women and showcases its boisterous heroine’s defiance by simply being herself. While the broad strokes may not always be subtle, Martha Jane always proves the sum of her experiences in a suitably rollicking but also smartly engaging film.