This elegant sequel to the 1992 original boasts a multi-layered, astute script. 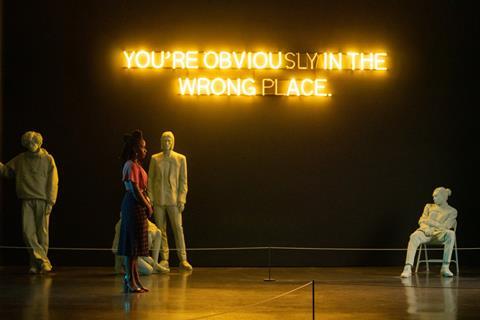 The Candyman sequel is a horror film about hypocrisy — in the art world, in law enforcement, in society itself. Building off the 1992 original, which told the story of a boogeyman with a hook for an arm, director Nia DaCosta’s follow-up is both bitingly satiric and elegantly suspenseful, illustrating how race and class still bedevil modern life. Produced and cowritten by Jordan Peele, and featuring an arresting performance from Yahya Abdul-Mateen II, Candyman has an unmistakable anger embedded within its scares, persuasively depicting how Black Americans feel traumatised by a country that treats them like monsters.

Opening in the UK and US on August 27 via Universal, the picture is considered a direct sequel to Bernard Rose’s original, ignoring the events of two mid-to-late-1990s films that expanded the central narrative. Abdul-Mateen II’s rising star will be a commercial plus, but the film’s two strongest assets are probably horror fans’ familiarity with the titular villain and Peele’s involvement in the project.

The filmmakers intriguingly twist the knife

Abdul-Mateen II plays Anthony, a promising Chicago painter who’s been creatively stagnant for years, despite the encouragement (and financial backing) of his art-gallery girlfriend Brianna (Teyonah Parris). Hoping to appeal to white benefactors, who crave the “realism” associated with works dealing with poverty, Anthony decides to base his new work around Cabrini Green, the city’s notoriously underfunded urban housing project that was once home to poor black families who were essentially left to fend for themselves.

During his research, he hears stories from a longtime local, William (Colman Domingo), about a mythical figure known as Candyman, who would supposedly attack residents if they said his name five times in the mirror. Blithely, Anthony does just that, unleashing a nightmare for which he’s not prepared.

Rose’s ’92 film, based on the Clive Barker story “The Forbidden,” was an imperfect examination of racism, with Candyman meant to represent the pain of marginalised black communities. DaCosta (Little Woods), who cowrote the screenplay with Peele and Win Rosenfeld, gives that commentary a sharper edge — largely by focusing the story on black characters, as opposed to the white grad student (played by Virginia Madsen) from the original.

But the filmmakers intriguingly twist the knife — starting with the fact that Cabrini Green has long since been torn down, which allows the well-to-do Anthony and Brianna to live in a pricey condo in the same area, oblivious to the economic strife that once besieged the neighbourhood. Anthony’s attempts to exploit the area’s grim past is presented as bitterly ironic — he’s more than happy to capitalise on others’ perception that he came from this rough background if it will make his art seem more authentic.

However, that’s merely one layer of Candyman’s astute script, which also piercingly dramatises police brutality and skewers the pretentiousness of the art world, constantly illustrating the inequalities between those in power and those at their mercy. Anthony’s anxieties are vividly illustrated — accentuated by John Guleserian’s atmospheric lensing and Robert Aiki Aubrey Lowe’s quietly unnerving score — but when a bee sting on his right hand gets infected, this tense film shifts into a higher gear.

For those who have seen the original Candyman, the presence of bees can only mean one thing — that hook-wielding foe is nearby — and Tony Todd reprises his role, his glare still menacingly icy. DaCosta doesn’t overindulge in terms of graphic kill scenes, but she’s quite effective at picking her spots, choosing just the right moments to let a quick dash of gore suggest Candyman’s lethal talents.

Abdul-Mateen II brings wonderful complexity to Anthony, who’s so hungry for success that he compromises his principles. The bee-sting infection that starts to travel across his arm gives Candyman an opportunity for some disturbing body horror, but it’s also a nifty metaphor for the guilt he feels over his crass creative sellout. Abdul-Mateen II is sufficiently sympathetic without letting us forget that, in some sense, Candyman’s havoc is meant to serve as Anthony’s comeuppance.

But the film’s misgivings about Anthony can’t compare to its dim view of “enlightened” white liberals who allow housing projects like Cabrini Green to fester while they live untroubled far away. It’s disappointing that Candyman gets plot-heavy near its end, straining somewhat to deliver one final twist — as well as explain some of the mysteries regarding Candyman’s actions. But even if Cabrini Green is gone, its most famous fictional figure remains — in this expert sequel, he’s a reminder of past racist policies, literally haunting those who pretend those problems aren’t still very present.