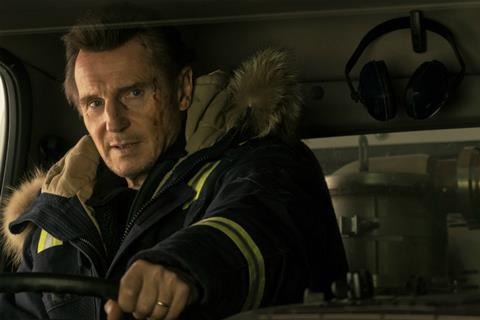 Peculiarities abound in Cold Pursuit, a winter wonderland populated by odd characters, dark humour and a loopy revenge narrative. This English-language remake of In Order Of Disappearance by its Norwegian director Hans Petter Moland doesn’t particularly succeed as a thriller, but the film’s gleeful perversity at refusing to satisfying genre conventions gives it a scruffy integrity all the same. Although ostensibly another Liam Neeson vehicle, Cold Pursuit is more about atmosphere and absurdist touches, leaving the Taken star to serve as window dressing in a film that boasts plenty of attitude, but not as much action.

Opening February 8 in the US and two weeks later in the UK, this snowbound pseudo-Western may not match the commercial heights of Neeson’s Taken trilogy ($929 million worldwide combined) or Non-Stop ($217 million), with a chilly vibe potentailly curtailing word of mouth. While there are allusions to Fargo and Tarantino, Cold Pursuit most resembles The Counselor, Ridley Scott’s divisive, nervy 2013 anti-suspense thriller in which oddness outstripped excitement. Not unlike that film, Cold Pursuit can be talky and quirky, blatantly subverting audience expectations by holding off on the requisite shoot-‘em-ups and other genre tenets in pursuit of something far more idiosyncratic and adventurous. Which is not to say that Cold Pursuit isn’t violent or lacks a high body count — rather that, like other eccentric dark comedies such as Seven Psychopaths, the movie follows its own rhythms, even if it risks alienating the audience in the process.

Neeson plays Nels Coxman, a snowplow driver in a small Colorado town who is told that his son has died of a heroin overdose. Refusing to believe that finding — his boy was never a drug user — Nels starts to investigate, discovering that his son ran afoul of some local criminals led by the ruthless Viking (Tom Bateman). That realisation doesn’t come easy, though, requiring Nels to kill one bad guy after another until he learns the truth about his dead son.

The remake is directed by Moland, who also helmed In Order Of Disappearance, and the original’s irreverent streak and sense of place have been successfully transplanted. Moland and cinematographer Philip Øgaard shoot the wintry, desolate landscape like a snow-covered Old West, emphasising the isolation and ominousness. (Cold Pursuit was actually filmed in Alberta, Canada.)

Nels may resemble other hard-edged Neeson protagonists, but soon he becomes merely part of this unforgiving environment — just one more figure in an escalating turf war between rival crime bosses fighting for control of the frozen terrain. Screenwriter Frank Baldwin introduces us to several members of Viking’s gang and family, giving Cold Pursuit an unexpected ensemble quality. In fact, there are stretches in which Nels doesn’t even factor, as we see how his son’s death has set in motion a string of other killings and schemes. (Tom Jackson plays an icy Native American crime boss who has Viking in his sights.)

Neeson occasionally reveals the pathos he displayed in The Grey — the high-water mark of this era of his career — while still delivering some of the standard tough-guy action moves. (One of Cold Pursuit’s more ironic jokes is that Nels is introduced at the start of the film as a humble, noble pillar of the community, but transforms into an efficient killing machine pretty quickly.) At 66, Neeson has played his share of lone-wolf enforcers, which is why his relatively muted turn here is so welcome. Instead of dominating the proceedings, Nels gets swept up in the maelstrom he unwittingly helped create.

A running gag throughout Cold Pursuit is that each character death is subsequently memorialised on screen with the victim’s name (and nickname) appearing in white letters on a black background. The first few times, the macabre gimmick is wryly amusing but, as the corpses pile up, the effect becomes routine. Likewise, Bateman’s Viking proves to be too much of a flamboyantly accentuated creep to fully resonate as a compelling adversary. These overly clever constructions hint at the downside to Cold Pursuit’s bold, kicky style: like the landscape, the film is proudly untamed, but not always inviting.