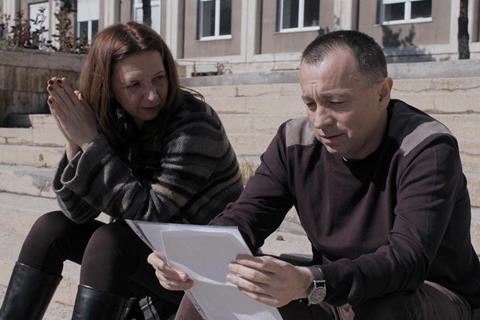 The original Romanian title of Alexander Nanau’s documentary, Colectiv refers to a Bucharest nightclub which was the site of a fire in 2015, the terrible results of which are the basis for this gripping investigative study. Taken more broadly, however, the word ‘collective’ suggests the social dimensions of the tragedy explored here, not least questions of administrative integrity, or the lack of it.

For followers of Romanian cinema, aspects of this healthcare-focused study will carry real-life echoes of Cristi Puiu’s drama The Death of Mr Lazarescu and, in its narrative tautness, this documentary can hold its own alongside the best of Romania’s contemporary fiction. A serious, composed approach to emotionally charged content, together with focus on a journalistic investigation, gives Collective something of the compelling pull of high-profile docudramas such as Spotlight, promising healthy exposure beyond the festival circuit.

Opening captions fill us in on the fire that broke out at a rock concert at Colectiv on 30 October 2015 – which we then see in a hair-raising piece of video footage. A lack of fire exits led to 27 concertgoers being instantly killed and another 180 injured. Public protests led to Romania’s Social Democratic government to step down, a new temporary government taking over.

This is just the start of the story, however, as 37 more burn casualties died in hospital, despite official assurances that Romanian healthcare was up to European standards. The film then follows Catalin Tolontan and his fellow journalists from the newspaper Sports Gazette as they ask why people died of bacterial infections contracted in hospitals – leading to the discovery that antiseptic produced by a local company was significantly diluted at source. As the story breaks in the Romanian media, a web of official corruption, bribery and embezzlement in hospital management is unearthed; whistleblowers bring further evidence, including nightmarish video proof of negligence on wards.

A disturbing ‘true crime’ note emerges when a key figure in the scandal dies in mysterious circumstances. But for the film’s purposes, the decisive outcome of the paper’s investigation is the resignation of the health minister and his replacement by Vlad Voiculescu, a young man with a background as a patients’ rights activist. His first nervous appearance before in front of the press – “Hi, I’m Vlad” – attracts some scepticism. As the film’s focus turns from the journalists to his administration, however, it becomes clear that Voiculescu, who candidly allows himself to be filmed up close, is a socially committed man who intends to make significant changes, even though he proves somewhat out of his depth attempting to confront long-entrenched abuses. Inevitably, he himself comes into the firing line when Bucharest’s Social Democrat mayor Gabriela Firea makes him the target of her political attacks, just as Tolontan is accused on TV of stirring panic.

We also meet a survivor of the fire, Tedy Ursuleanu, a young woman who has contracted serious scars and damage to her hands. She is seen trying out a prosthetic hand as well as posing for a set of artistic photos that contribute to making her a potent and glamorous figurehead for the Colectiv victims; nevertheless, the film generally steers away from the personal experience of those involved to emphasise instead the corruption revealed by the fire and its aftermath.

Nanau – director of Toto and his Sisters (2014) as well as cinematographer on Sonia Kronlund’s The Prince of Nothingwood – acts as his own DoP as well as co-editor and, with co-writer Antonaeta Opris, collates a brisk, cogent narrative that moves between meeting rooms, government offices and TV studios, with periodic thrilleresque scenes as the journalists stake out figures implicated in the scandal. A closing scene brings a more emotional intimate note, while reasserting the key note of political anger which is evident, if discreetly expressed, throughout.