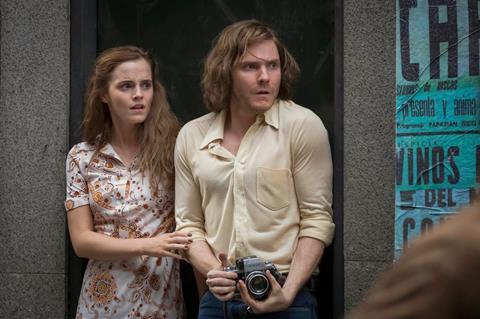 The victims of notorious Chilean torture camp Colonia Dignidad suffered more than enough without Colonia adding insult to injury. Writer/director Florian Gallenberger’s no doubt well-intentioned venture takes the raw material of heartrending personal tragedy and approaches it with the lurid instincts of exploitation cinema. The result is crassly insensitive and hopelessly inadequate and has more in common with recent Owen Wilson thriller No Escape than the Oscar-winning Costa-Gavras classic Missing. Critical support seems unlikely to be forthcoming for such a misguided venture leaving a rocky commercial future dependent on the allure of star names Daniel Bruhl and Emma Watson and the cheesy thrills generated by the film’s cranked up, do-or-die finale.

Daniel survives in Colonia by pretending to have been left “retarded” by the brain-frazzling torture, leading to some scenes that are hard to take seriously

Gallenberger’s screenplay, co-written with Torsten Wenzel, may be based on true events but it feels inauthentic from the earliest stages. Scenes in a disconcertingly English-speaking Santiago briefly establish the starry-eyed love between Lufthansa flight attendant Lena (Watson) and activist boyfriend Daniel (Bruhl). Everything changes with an expositional phone call handily informing them that a political coup has taken place, leaving General Pinochet in charge. The couple rush into the chaos of the streets snapping photographs of the political crackdown and inevitably wind up being arrested and herded into the National Stadium with fellow enemies of the state.

Lena is released but Daniel is removed to Colonia Dignidad, the home to a mysterious, Jim Jones-style religious cult presided over by the sinister Paul Schafer (Michael Nyqvist). Beneath the rural grounds lies a system of tunnels and cells where prisoners, including Daniel, are brutally tortured. Lena decides to go undercover to rescue him, posing as a potential convert to the cult.  What she experiences is a cross between a very horrible boarding school and a chain gang, with the wooden huts and barking dobermans making the connection to the Nazi concentration camps.

Soon her life is at the mercy of disciplinarian Gisela (Richenda Carey) but Lena is willing to endure anything that might reunite her with Daniel.

Daniel Bruhl and Emma Watson are both good sports and do their best to make Daniel and Lena seem real, but they fight a losing battle against a simplistic script and some terrible dialogue. Daniel survives in Colonia by pretending to have been left “retarded” by the brain-frazzling torture, leading to some scenes that are hard to take seriously. Gallenberger seems to take sadistic pleasure from the violence and beatings frequently doled out to the women in the camp, adding a further level of distaste.

Given the extraordinary lengths of Lena’s devotion there doesn’t appear to be a hugely persuasive passion or chemistry between the characters. Vicky Krieps leaves a more positive impression in a modest but telling supporting role as fellow cult member Ursel.

The final half hour of Colonia does generate some tension as Daniel and Lena make their escape bid, striving against impossible odds to evade Schafer, their captors, Pinochet henchmen and even the complicity of the German Embassy in their ordeal. However nonsensical some of this appears it is hard not to be caught up in the moment.

Ultimately, the most chilling elements of Colonia lie in closing titles, which show pictures of the real Colonia Dignidad, revealing details of the thousands who suffered there and the eventual fate of the real Paul Schafer. It is a fascinating story but Colonia singularly fails to do it justice.