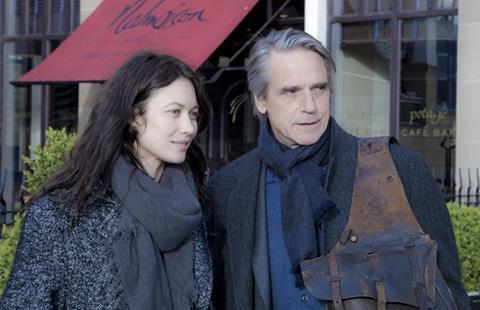 Even Jeremy Irons fans keen not to miss a single appearance by their hero, those who somehow managed to catch Kafka and doggedly tracked down The Fourth Angel, may have problems adding Giuseppe Tornatore’s new film to their roster. A turgid modern ghost story flaunting a showy but ultimately empty blend of love, supernovas and quantum mechanics, Correspondence will struggle to score distribution outside of Italy, English-language dialogue notwithstanding.

Opening on 400 screens on home territory on 14 January, the Nuovo Cinema Paradiso director’s latest outing casts former Bond girl Olga Kurylenko as an improbable mix of film stuntwoman and PhD-chasing astrophysics graduate, whose affair with the eminent professor played by Irons takes a strange turn when he disappears from her life but continues to bombard her with flowers, gifts, text messages and DVD video recordings.

Shot in Edinburgh, York, and two scenic Italian locations – the mountains of Sud Tirol and Lake Orta, in Piedmont – Correspondence at least looks good, most of the time, and Ennio Morricone’s mild-mannered, hummable score provides some distraction. But little can be done to disguise the weakness of an undercooked script based on an idea Tornatore apparently had in his bottom drawer for decades.

We only see Irons’ Ed Phoerum (pronounced to sound like ‘theorem’) and Kurylenko’s Amy Ryan together in the very first hotel room scene, their mutual passion established by a rather perfunctory snog and grapple, plus the affectionate nicknames the two have unimaginatively coined for each other – he calls her Kamikaze (she’s a stuntwoman), she dubs him Wizard (he’s clever).

Presenting a relationship between a professor and a much younger graduate on its own ethically complacent terms, before the censure of the older man’s family kicks in, feels like a refreshing move at first. But we gradually realise that the writer-director is supremely uninterested in the moral nuances of the set-up, in the same way that he seems to find it entirely normal that a supposedly intelligent, cultured woman would spend all her time in lectures, libraries and contemporary dance performances reading and replying to text messages, a habit that endears her as little to the film’s real audience as it does to the on-screen spectators that surround her in the theatre and at the university.

Computer screens take up an ever-increasing slice of screen time as Ed begins to communicate with Amy only via recordable CDs and DVDs, delivered by couriers or by the cleaning lady in the Italian lakeside villa which was the couple’s regular love nest. Mixing string theory and corny sentiment, these video love letters begin to drag before long, with some indigestible mouthfuls of dialogue that sound too literally translated from the Italian not helping the inertia. (It’s not just dialogue that feels translated – the regular oral exam system this Ukrainian-accented British PhD student is bafflingly subject to is also an Italian import).

Tornatore seems too in love with Irons’ character to lend him the dark side that the script needs. He’s a video-stalker, text-stalker and email-stalker, after all, but in the end it’s some clichéd business about a shadow in Amy’s past that will cause her to interrupt the flow of messages from the missing prof, rather than any sense that he’s becoming a creep and a weirdo. With wooden minor characters like Amy’s tech-savvy film-set friend Jason (Simon Johns) or Ed’s daughter Victoria (Shauna Macdonald) used as mere plot-advancers and information-providers, it’s left to Amy (and Kurylenko) to carry the brunt of a remarkably tension-free drama.

Eventually the script becomes so short on ideas that we’re reduced to watching the young action heroine and model student viewing herself onscreen as she delivers what amounts to a straight-to-camera soliloquy. A few scenes showing Amy doing daredevil stunts on set, or being encased in a full body mould for a CGI reconstruction, distract from the increasingly melodramatic main plot; one assumes, for the sake of symmetry, that Kurylenko had a stunt double for these sequences – hopefully one with a more interesting backstory.