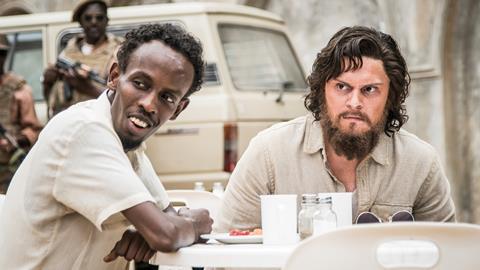 In the blazing heat of 2008 Somalia, inexperienced Canadian journalist Jay Bahadur (Evan Peters) attempts to navigate a turbulent socio-political landscape in order to write a book about the country’s infamous pirate gangs. This incendiary true story boasts a charismatic central performance from rising star Peters (X-Men, TV’s American Horror Story), whose everyman charm helps drive a narrative which has a tendency to get entangled in its own worthy intentions..

Tonal missteps aside, Dabka remains a solid take on a fascinating story.

Thematic comparisons to Paul Greengrass’ Captain Phillips, which dealt with the hijacking of an American cargo ship by Somali pirates, should help garner interest in this far more modest picture after its Tribeca debut (they share an actor in the Oscar-nominated Barkhad Abdi). While it is likely to be favoured by festivals and distributors with a keen interest in socially conscious filmmaking, the thrilling story and interesting cast (also including Al Pacino in a small cameo) may help Dabka find a wider audience.

Its Somali-language title translates to ‘fire’, and that’s the perfect description for the environment in which 24-year-old aspiring journalist Bahadur finds himself. After trying to make a name in his native Canada with a series of fluff pieces and rejection letters, a chance encounter with grizzled local journo Seymour Toblin (an untaxed Pacino) pushes Bahadur to make his own luck. Remembering that he got a decent grade on a college paper on Somalia, he wrangles an invite to stay with the son of the country’s president and quickly realises he actually has to live up to his ambitions.

If this journey to Somalia is presented as a series of lucky events, and Bahadur himself a man whose ego may well be bigger than his talent, things soon snap into sharp focus when he arrives in the African nation. The same traits that made Bahadur such a fish out of water in Canada see him fit easily into the simpler machinations of Somali society; his affable nature, his open and non-judgemental style of questioning and, crucially, his foolhardy willingness to throw himself into situations without any sense of the outcome.

Despite the ease with which Bahadur seems to fit into his new life, the threat of danger is ever present, however — even if all violence remains off-screen.  Andrew Feltenstein and John Nau’s haunting, authentically Somali score is also effectively insidious, giving an edge to all of Bahadur’s interactions with the pirates. Similarly, cinematographer Scott Henriksen captures both the beauty and isolation of this dusty landscape, in which Bahadur is permanently marked out as the only white person on screen.

While Bahadur is undeniably living dangerously in his dogged pursuit of a story, American filmmaker Brian Buckley is just as determined to foreground the human side of this issue. His focus is not on the lawbreakers -— although they are given plenty of chances to explain their actions —  but the men and women caught up in their wake, a large number of whom are played by non-professional Somalis. These include Maryan (Sabrina Hassan Abdulle), a charming pirate’s wife who enjoys a mild flirtation with Jay, and a permanent gaggle of innocent kids playing football in the dusty streets. Elsewhere, the hugely likeable local fixer Abdi is played by the brilliant Abdi, who made his debut as a pirate in Captain Phillips.

Buckley previous won an Oscar for Asad, his 2012 short about a small boy attempting to come of age in war-torn Somalia, and has imbued his adaptation of Bahadur’s book The Pirates of Somalia with the same sense of social responsibility. While this well-intentioned approach is understandable given the subject, it does see the story veer towards the bluntly didactic. While animations depicting Bahadur’s fever dreams and the pirates’ growing influence are effective, Peters’ quirky, self-aware narration is intrusive and grating. “Firstly, let me start by saying that I actually hate movies with their main characters as narrators,” intones Bahadur at the start, before explaining why his is different and necessary. It’s not. Still, such tonal missteps aside, Dabka remains a solid take on a fascinating story.