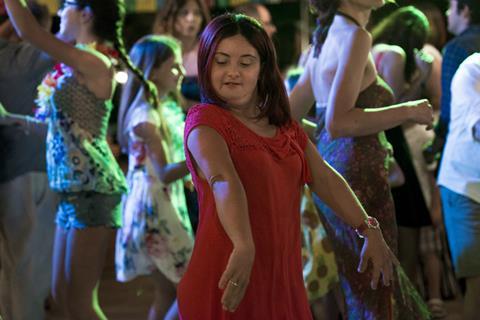 “I thought they all went around with their tongues hanging out”, confides a well-meaning restaurant owner to the father of Dafne, the Down’s Syndrome woman at the centre of Federico Bondi’s small, gentle, heartwarming second feature. It’s the only time we hear such an unreconstructed attitude expressed, but it lurks unsaid in the background of a film which has a clear mission to refute this kind of vulgar prejudice.

Mixing drama with small, indulgent comedic moments, Dafne tells with modest means the story of a 35-year-old Italian woman born with the genetic condition who is left alone with her ageing, depressive father after her mother’s sudden death. It’s a slight but tender film, and would remain a worthy exercise with a made-for-TV feel were it not for a final third that lifts it into richer and stranger territory. This may not be enough to propel Dafne much beyond a small Italian arthouse run, but it looks certain to notch up further festival berths after its Berlinale Panorama debut.

There’s an impression at times that the story has been too neatly stitched around its exuberant lead actress, Carolina Raspanti, whose irrepressible personality is as much of a beacon as her hair with its lustrous red highlights. Like Raspanti, who has written two autobiographical books about living with Down’s Syndrome, her character Dafne works in a Co-op supermarket, where colleagues and customers are shown showering her with affection in passages that play a little like an inspirational pro-diversity video. If these mid-point love-ins grate just a little, it’s because the story takes a while to hit its stride after the trauma that precipitates the drama: the death of Dafne’s mother during a summer holiday on the Tuscan coast.

With the wind knocked out of him by his wife’s death, Dafne’s elderly father, Luigi (Antonio Piovanelli), slides into a melancholic stupor. He’s an introvert, mutely aware that, as in many couples with “problem” kids, it was his wife who took on most of the care burden. Now, as he begins to drift, it’s Dafne who begins to take control, asserting her independence while keeping a watchful eye on her father – something she conceals beneath a fast-talking manner full of self-deprecating irony.

But it’s not until Dafne proposes that she and her father walk across country to pay a visit to her mother’s grave that the film snaps out of its episodic meander and becomes something a little more resonant. Dafne’s shocking pink jacket and her father’s electric blue one stand out against the grey and wintry landscape as they take untrodden paths across meadows and streams, exploring an old ice-storage dome, talking about this and that, ending up in an out-of-season hotel full of stuffed animals displayed as hunting trophies.

Nicely understated, this walk in the woods feels a little dreamlike, a healing journey of the soul, without ever clobbering us with heavy-handed symbolism. It builds to a quietly moving finale that is guaranteed to choke up even the most battle-hardened film critic.