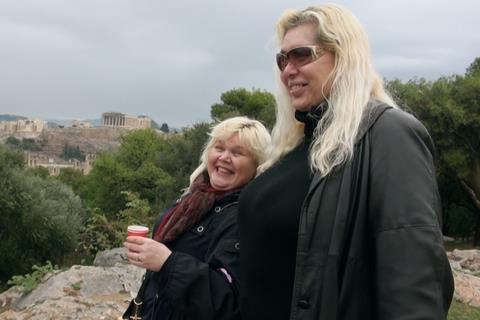 ’Days And Nights Of Demetra K

There are certain individuals who are in effect “walking documentaries,” so engagingly charismatic that all a director needs to do is follow them with a camera and let the monologue flow. The eponymous and garrulous heroine of Eva Stefani’s Days and Nights of Demetra K. — a veteran Athens sex-worker of indeterminable age, exuding an irresistible combination of the world-weary and the utterly indefatigable — is a prime example.

Demetra’s numerous chatty, friendly interactions with the director provide much of the picture’s warmth and charm

But Stefani’s film is far from being merely one more slice of fly-on-the-wall observational non-fiction. Indeed Demetra’s numerous chatty, friendly interactions with the director (who, operating her own camera hand-held, is never seen but frequently heard) provide much of the picture’s warmth and charm. Like its subject this is a somewhat rough-edged but highly likeable affair, whose world-premiere in competition at Thessaloniki should prove the start of a healthy festival run.

There is seldom a shortage of empathetic character-studies about sex-workers in the documentary realm; Days and Nights of Demetra K. arrives just months after Helena Třeštíková’s Anny, which (typical of the Czech maestro’s approach) condensed a couple of decades into just 67 minutes. And while the pair could make cosy double-bill bedfellows, both could warrant significantly longer running-times.

Stefani — whose directorial credits stretch back to 1995 and encompass shorts, documentaries, fictional features and television projects — works here with a relatively inexperienced editor, Yorgos Kravaritis. Their result falls into two discrete halves, the first taking place around the time of the 2012 general election in which the centre-right narrowly retained power. This section introduces us to the blowsily Rubensesque Demetra, her neighbourhood in Glyfada (a large southern suburb) and her place of work, which she proudly describes as “the oldest whorehouse in Athens.” The latter is a cluttered, old-school, intimate sort of spot: “Isn’t my whorehouse in tip-top condition?” Demetra asks.

But times are tough. “When business in brothels is bad,” Demetra sighs, “that means the economy is in trouble.” Few customers are spotted coming up the winding staircase via the establishment’s black-and-white CCTV monitor; and several of those are amusingly turned away by the highly selective Demetra. Stefani’s eye for telling minor detail is sharp, down to the way Demetra (a natural performer who thrives on attention) adds sugar to her tea in two pours and then stirs, stirs, stirs, stirs…

It’s no surprise when, in a second half catching up with developments after a three-year break, the venerable maison has finally closed down. The doughty Demetra continues to operate, however, now having relocated to a more central domestic location in a scruffy but neighbourly part of downtown. This ardent animal-lover (she has more than a dozen dogs) soon becomes a Bardot-esque Lady Bountiful for the local stray felines, her nurturing instincts helping her to cope with the loss not only of her bordello but also of her beloved mother.

The Greek economic situation continues to be perilously fraught, of course, with the political tide moving firmly towards the socialist and progressive end of the spectrum. But while Demetra identifies herself as a leftist — indeed, she is the “head of the sex-workers’ union” — she finds her profession under attack and even existential threat from feminists and others who bracket sex-work with human trafficking. At one early stage she muses ruefully that her bordello functioned without a problem under Greece’s various 20th century authoritarian regimes, but struggled to cope after democracy returned to its cradle.

While retaining the lady herself front-and-centre throughout, Days and Nights of Demetra K. carefully avoids being fixated or dominated upon one particular individual, and instead provides snapshots of her changing environment, contexts and times in unobtrusive but telling fashion. The film is also a casually sketched evocation of Athens, from the grubby, graffiti-strewn streets to the Acropolis; the ancient, crumbling, patched-up city presented via the same warts-and-all but essentially sympathetic light afforded to the picture’s extravagant, unapologetic protagonist.