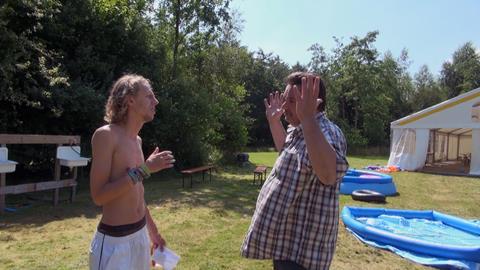 Early in Deaf Child, Tobias de Ronde expresses concern that a film “just about my life” couldn’t possibly be interesting. How wrong he is. Alex de Ronde’s documentary on his son immerses the viewer in the life of a man who was born deaf but never once considered himself to suffer from a disability. Told with a light touch and fond affection, it transforms family memories and difficult decisions into an emotionally-charged film.The VPRO Audience Award at IDFA offers sound evidence of its wide appeal.

This is a thought-provoking film that challenges perceptions but succeeds because it captures a sense of the inspirational life of a deaf man who “was never taught that there were obstacles”.

When the one year-old Tobias failed a hearing test in 1990 it became evident that he was deaf. His father recalls that as a parent his instinct was to rapidly adjust his expectations of the life Tobias might lead. His main worry was that Tobias would find himself isolated and lonely. The stirring quality of Deaf Child is the way it reveals that Tobias has done everything he might have wanted, from karate classes and a diving course as a child to travelling the world as an adult.

Extensive use of family home movies lends Deaf Child some of the qualities of Richard Linklater’s Boyhood. We literally watch Tobias grow before our eyes from child to man. Footage of the adorable young Tobias eagerly at work in a speech therapy session seems designed to make the viewer misty-eyed. Immediately afterwards the adult Tobias recalls how much he disliked speech therapy and cheerfully declares it “useless”. Those type of juxtapositions counteract any threat of sentimentality.

The adult Tobias is an expressive, engaging figure and a natural born storyteller. He is seen telling elaborate direct to camera jokes that suggest a future career as a sign-language stand-up. He is smart, funny and endearingly irreverent. You suspect that de Ronde senior would never pat himself on the back but the film offers constant testimony to the value of a loyal, loving family in making Tobias the confident, well-adjusted figure that he now presents to the world.

Family is an important theme in Deaf Child, not least the death of Tobias’s mother. The close, enduring bond between Tobias and his older, hearing brother Joachim is a delight to behold. The joint interviews with them conducted in flowing sign language reveals an immense affection summed up in Joachim’s comment that “you are brothers and deafness doesn’t really matter”.

De Ronde inevitably wonders if he made the right decisions along the way, in accepting Tobias’s preference for sign language or letting him attend a distant school where sign language was the norm. The answer lies in a Tobias who earned his masters degree, taught sign language and attended Gallaudet University in Washington D.C.

Deaf Child tells a very personal story but it also explores more general issues of the benefits of cochlear implants, the future for the deaf community and whether the advance of science might one day mean that deaf people have become extinct. It is a thought-provoking film that challenges perceptions but succeeds because it captures a sense of the inspirational life of a deaf man who “was never taught that there were obstacles”.