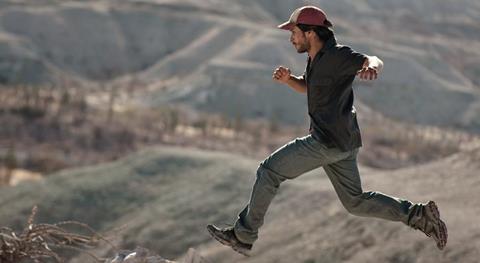 Who says a genre film can’t have a social conscience?  In Jonas Cuaron’s lean, low-key thriller Desierto, the topic of desperate immigrants seeking a better life underpins an otherwise conventional story of the hunter and the hunted. It unfolds with crisp professionalism and flickers of tension but could easily wind up falling between two possible audiences; too violent and superficial for arthouse patrons who supported the far more compelling Sin Nombre or The Golden Dream (La jaula oro) but also lacking the schlocky zing of something like Michael Douglas’s The Reach that could have endeared it to action fans.

Desierto feels strictly by the book and it is a book we already know from cover to cover.

The son of Alfonso Cuaron, Jonas co-wrote Gravity and there are vague thematic similarities in the story of the struggle to survive against impossible odds in an inhospitable landscape. Here,a group of Mexicans are attempting to cross the border into America when their van breaks down leaving them stranded in the vast, sun-bleached expanses of the badlands.

Moises (Gael Garcia Bernal) is the good samaritan of the group who acts as the chivalrous protector of one of the woman and stays behind to help the wheezy, unfit straggler as the others march on. If this were a western, and it often feels as if it could be, then Moises would have been played by James Stewart.

The group faces all kinds of physical challenges from the record temperatures, suffocating heat and dehydration but none of them could have predicted the threat from Sam (Jeffrey Dean Morgan),  a deranged vigilante determined to protect his country from enemy invasion by any means necessary. A Confederate flag flies from his vehicle and a killer Belgian Malinois dog called Tracker is his loyal companion as he grabs his rifle and starts picking off the immigrant travellers like fish in a barrel. Moises becomes the leader of the five who remain after Sam’s first attack as they try to outrun and outwit their pursuer.

It is a decent enough premise set in some rugged, beautifully filmed desert landscapes, but the characterisation is sketchy, with Gael Garcia Bernal permitted one substantial scene to assert the humanity of a man seeking to be reunited with his son. Jeffrey Dean Morgan is not so fortunate and his character is left to be taken at face value as a kind of psychotic Marlboro Man with a perverted sense of patriotism.

The best performance comes from the dog, or the several dogs, playing Tracker, who displays the boundless energy and athleticism that even Tom Cruise might envy. Tracker has to be the fastest, smartest screen dog since Rin Tin Tin as it runs vast distances, hares up cliff sides and leaps tall spaces.

The problem with Desierto is that once it comes down to a manhunt, we are left to tick off the familiar ingredients as countless near misses from flying bullets send Moises scurrying for his life, the discovery of a nest of deadly snakes briefly ups the tensions and inevitably a scramble along a rock faces dislodges that pesky trickle of rubble that always reveals a hiding place. The issue of immigration couldn’t be more timely or poignant, but everything else in Desierto feels strictly by the book and it is a book we already know from cover to cover.