Offbeat romance served with rumbustious energy and a punk spirit 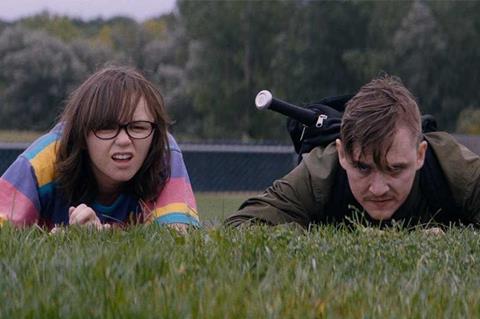 Misfits of the world unite in Dinner In America. The latest feature from Adam Rehmeier (Jonas, The Bunny Game) is an offbeat romance served with rumbustious energy and a punk spirit. Like the initially resistible central character, it surprises by growing sweeter, softer and more accessible as it unfolds. There is cult potential in a film that has enjoyed a substantial festival run over the last challenging year.

Rehemeier seems to be channelling vintage John Waters in the early stages of Dinner In America. Angry young man Simon (Kyle Gallner) would be right at home in Waters’ world with his nihilistic posturing, distinctive haircut and gift for causing offence. On the run from the authorities, he seems a sneering cesspit of resentment and alienation. Staccato editing and a thrashing soundtrack from John Swihart underline his outlaw status.

It eventually becomes clear that there is more to Simon than meets the eye, but the tone of the film starts to change with the introduction of 20 year-old Patty (Emily Skeggs). A naive young woman with a passion for punk rock band Psyops, Patty lives a life of seething frustration under the roof of her straitlaced, conservative parents. When she helps Simon avoid the law, he invites himself to meet her parents and uptight younger brother Kevin (Griffin Gluck). Simon’s subversive influence creates affinities with the early films of Francois Ozon, notably Sitcom (1998). His mere presence starts to change the family dynamic and nudge Patty along the road to self-realisation.

Dinner In America is loosely structured around a series of disastrous meals in which Simon’s blend of wild fabrications and stinging home truths prise open the cracks in the facade of the all-American family. He proves to be a man of many talents from musician to drug-dealer, basketball player and family counsellor. He can charm, seduce and offend in equal measure which makes him a lively addition to any dinner table.

Looking like a young Sally Field, Emily Skeggs brings spunky determination and sharp comic timing to Patty whilst Kyle Gallner has all the bad boy charisma required for Simon as well as the shadings of vulnerability that ultimately make him and the film more sympathetic. There is a chemistry between the two that makes their blossoming romance believable.

Blending cutting remarks with a fondness for scatalogical humour, Rehmeier stealthily confronts America’s attitudes to outsiders, family values, class, sex and race. Outrage seems to delight him and he isn’t averse to toying with romantic comedy cliches as Simon invites Patty to ditch her glasses and let her hair down in a time honoured transition from geeky duckling to desirable swan.

Dinner In America is sketchy at times but there are enough running jokes and moments of comeuppance to keep the pot boiling. The freewheeling feel is built on the discipline of a smartly structured screenplay that reveals more layers to the characters and allows the bad attitudes and hard edges to melt away and ultimately reveal an unexpectedly soft-centred creation.