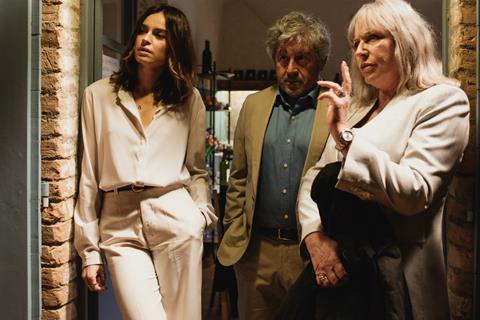 An idyllic life rubs up against the messy complexities of the wider world in Dolce Fine Giornata. The latest feature from Jacek Borcuch (Tulips, Lasting) traces the connections between the personal and the political, transforming a family drama into a consideration of European identity. Further festival interest will follow for a film that should also have a commercial appeal to older viewers drawn to the virtues of traditional arthouse cinema.

Polish-born poet Maria (Krystyna Janda) seems to have it all. She lives in a vast farmhouse in Tuscany surrounded by her loving family. There is a sense of contentment to a life that has seen her honoured with the Nobel prize for literature. There are friends for company, people who stimulate her mind and even a mild flirtation with Nazeer (Lorenzo De Moor), an Egyptian migrant who runs a waterfront taverna.

Borcuch gradually introduces a sense that this may be too good to be true. There are reports of refugees who have escaped whilst awaiting asylum in Lampedusa. Maria is advised to buy gold in these “uncertain times”. Frank Sinatra crooning ’It Was A Very Good Year’ on the soundtrack seems a particularly ironic choice as world events refuse to leave Maria in peace.

It is Maria’s controversial reaction to a terrorist act in Rome that sets the film on a path to considering her values and beliefs in an age that seems to encourage prejudice and the “fear of the other” . Despite her earlier belief that she has nothing left to say to the world, she cannot remain detached from what is happening around her.

Borcuch gives the early stages of the film a loose, jazzy feel, underlining Maria’s unflappable nature. There doesn’t even seem a great deal of urgency when her seven year-old grandson Salvatore temporarily goes missing. The mountaintop town of Volterra is comfortingly isolated. Initially a sympathetic figure, Maria grows more multifaceted and contradictory as the film unfolds. Her belief in tolerance and freedom is entirely admirable but there is also an arrogance in thinking her actions are without consequences. Borcuch emphasises the point in the smallest detail (her refusal to stop smoking in public spaces) and the grandest gesture (her naivety when it comes to the public impact of her pronouncements)

Indeed, part of the attraction of Dolce Fine Giornata is the central character of a woman in her sixties who is an instinctive rebel and provocateur trying to figure out her place in the world. Also appealing is the film’s old-fashioned feel. This belongs to a tradition of European arthouse cinema (the early work of Margarethe Von Trotta comes to mind) that trades in ideas, thought-provoking conversations, political engagement and moral dilemmas.

It is, however, not immune to pretension. At one point Maria is told: “You are filling the gap left by Pasolini.” That aside, Borcuch’s understated storytelling and the compelling central performance from Janda create a graceful film that is consistently engaging and often very moving.