‘Dounia And The Princess Of Aleppo’: Annecy Review 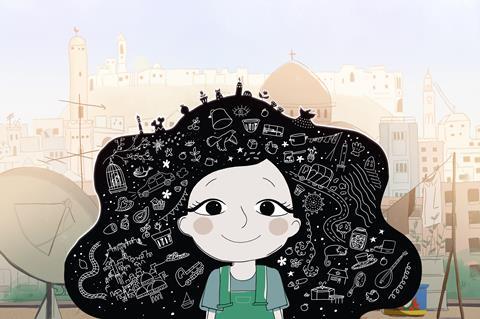 ‘Dounia And The Princess Of Aleppo’

Six-year-old Dounia (sparkily voiced by Rachaf Ataya) is forced to leave her home in Aleppo, accompanied by her grandfather and grandmother and the kind of magic that has its roots in the fabulous stories her parents told her. Together they undertake a perilous journey in order to find the new home which, Dounia is sure, is waiting for them somewhere. This enchanting, appealingly animated story of a displaced child is aimed at family audiences but despite, or perhaps even because of, the picture’s fantasy elements, it could prove to be a disarmingly potent proposition for adult animation fans also.

The film’s gentle charm is in part to do with its pleasing, economically graphic animation style

The character of Dounia started her life in a graphic novel, written by Marya Zarif, who co-directs here. The book was subsequently adapted into an animated series before its latest incarnation as a feature film. But Dounia And The Princess Of Aleppo’s appeal should extend beyond audiences who are already familiar with the source material. It handles hot-button themes such as migration and the plight of refugees with no connection to a new potential homeland with an empathetic simplicity which should make those concepts accessible to younger viewers. Sweet, but never saccharine, Dounia is a picture of considerable charm which could find a theatrical audience but might be best suited to a streaming-platform release.

Even before the war in her country forced Dounia to flee, the resilient and chirpy little girl has had plenty of tragedy to deal with. Her mother Leyla (voiced by Zarif) died when Dounia was still too young to fully remember her; her father, brave through his own grief, wove stories for his daughter which cast Leyla as a princess imbued with magic powers. Then Dounia’s father was taken from her also, in this case by uniformed men who came to the house late at night and arrested him. Dounia’s grandparents protect the child with love and their own passions — her grandfather passes on a joy in music, her grandmother cooks for her. (“It is said that if stones rained from the sky,” says Dounia, “the women of Aleppo would make jam from them”.)

It’s the cooking, the cherished recipes providing the distinctive flavour of the city, which add an element of enchantment to the story. Five of the “magic” baraki seeds, an ingredient in her grandmother’s cheese, are in Dounia’s pocket when she leaves home. And they provide a connection to the fantasy and flights of imagination which are much needed when Dounia, grieving the death of her canary Habibi and worried for the friends left behind, sets out on her journey.

The film’s gentle charm is in part to do with its pleasing, economically graphic animation style — however bleak the outlook, the frame is always full of smiles and flowers, a representation of Dounia’s optimistic spirit. But equally crucial is the use of music — oud and flutes feature heavily, but it is in the moments in which the characters sing and dance together that the film’s celebratory approach to life, however challenging, is most effectively conveyed.

International sales: Be For Films, sales@beforfilms.com