Brian Dennehy stars in a drama about lost chances, and last ones 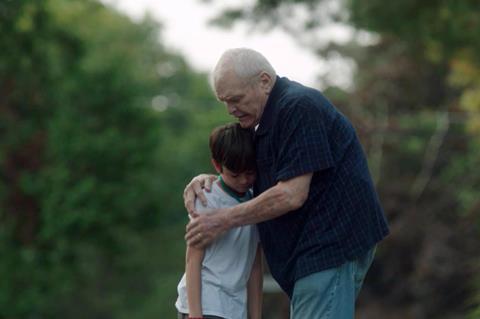 Some films hit you like a double espresso; others overwhelm you like 151-proof rum. Driveways is more like a nice cup of chamomile tea. It’s pleasantly comforting, and goes down easily – but afterwards, you have to work hard to remember if you even had it at all. This second feature from Andrew Ahn – who previously gained notice for his coming-of-age, coming-out film Spa Night – is a carefully observed story of a single woman and her eight year-old boy who arrive late one night in a tiny New York town.

With authentic spaces around them, Ahn’s actors relax into the realism.

Premiering at the Generation 14 plus sidebar in Berlin, Driveways could find a welcome spot at smaller festivals, particularly there whose audiences prefer gentle, quietly told, warm-hearted fare. But beyond that, home screens seem like its natural venue.

Fiercely bonded in the way only abandoned mothers and small sons can be, Kathy (Hong Chao) and Cody (Lucas Jay) arrive one night in a tiny New York town. Kath’s estranged older sister has died, it seems, and it’s time to clean out her house. Considering it’s the beginning of a hot summer, and that her sister was a hoarder, the next few days promise to be especially unpleasant.

One small suggestion of conflict develops early. There’s a hulking, gruff, old white man next door who – at first – only peers at them through his curtains. Considering that he proudly wears a cap announcing his service in the Korean War, and that his new neighbors are Korean-Americans, some sort of artier Gran Torino seems promised, with less violence, perhaps, but equally ugly outbursts of resentment. The film actually avoids that particular confrontation – largely avoids the issue of race completely. Sadly, though, it fails to deliver any other conflict.

In fact, nothing particularly startling happens at all. Cody, meets two bullying children, then makes friends with two nicer ones. His mother’s clean-up efforts start slowly, then pick up speed. Del, their cranky neighbour, begins to thaw, and eventually fills the role of a substitute grandfather. Loneliness is held at bay, briefly. Lives change, subtly.

Ahn, meanwhile, calmly sits back and watches, with Ki Jin Kim’s camera capturing the lazy, hazy rhythms of small-town life. There’s bingo down at the veteran’s hall, where $4.50 gets you a Miller Genuine Draft and a shot of whiskey. Birthday parties at a roller-skating rink, with your choice of pizza or chicken fingers. A nosy neighbour lady who can still, mostly, be safely ignored. And of course there’s the ugly clutter of that tiny house, filled to bursting with a smorgasbord of schlock – Beanie Babies, souvenir pillows, neon aluminum water tumblers and, even, sadly, a dead cat. (Special kudos should go to Charlotte Royer, who handled the production design.)

With authentic spaces like this around them, Ahn’s actors relax into the realism. As Del, the massive Brian Dennehy slumps over his morning oatmeal in lonely defeat; as Cody, little Lucas Jaye cuddles close to his mother for protection. And as Kathy, Hong Chau is mostly, intriguingly closed off, except for a flash of anger when she talks to her ex on the phone, a twinge of regret when she sees her sister in an old family photo.

As good as the actors are with the small moments provided, though, you wish the script had given them larger ones; as recognisable as these situations are, you wonder what the film would have been like if it teased out more of their drama and gave us at least one small set-to, one real revelation, one sweet triumph.