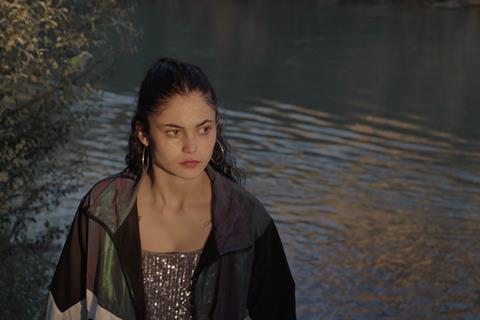 The story of a rural Spanish summertime romance is complicated in wonderfully intriguing ways by Elena López Riera in her daring, multi-layered debut feature El Agua, which poses a fascinating question: how does where we are from impact on the kind of love we feel? López Riera’s answer, which can be summed up as boy meets girls meets magical realism meets women’s solidarity, is both intimate and ambitious in scope, thought-provoking and emotionally engaging.

A film which always feels carefully poised on the edge of the surreal, where dark things always seem to be pressing in

We are in a hot, shimmering village in eastern Spain, the region where López Riera grew up and to which El Agua is a kind of homage. 17-year-old Ana (Luna Pamiés) lives and works in the hot, dusty roadside bar run by her mother Isabella (Bárbara Lennie) along with Ana’s widowed grandmother (Nieve de Medina). The men who have been part of their lives are rarely, if ever mentioned but, precisely because there are no men around, their all-female family has become an object of suspicion to the traditionally minded local community: at one point, even the word “witch” is mentioned. Following a lemon grove kiss, Ana and José (Alberto Olmo), part of Ana’s gang, embark on the romance that will give the story its structure.

But suddenly, we are listening to stories told to camera by actual local women, with completely straight faces, of a regional legend in which a bride was swept to her death by the rising flood waters that for centuries have periodically devastated the region: moments of striking documentary footage pop up from time to time to remind us of the horrors that this involves, whilst also making it clear that the existence of the river legend is more than justified. The river apparently becomes jealous: when the water gets into a woman, we are warned, the river will take her away. It’s potent, magical realist stuff worthy of Gabriel García Márquez, and throughout the film we will return regularly, indeed too often, to the talking heads of women giving their own take on it: it is a sexist myth that has clearly got into the heads of the locals, including Ana’s.

López Riera’s multiple award-winning 2018 short Those Who Lust was built around the local custom of painting male doves, releasing them along with a female and, without going into details, choosing the most amorous male as the winner. Doves and owners return in El Agua: among them are José and his rough-hewn father (Pascual Valero), and though the footage of the doves makes for some visually stunning moments in a film that is full of them, the sexist beliefs underpinning the somewhat inhumane ritual will turn into trouble for Ana and José, who seem doomed not to be able to have their summertime love affair.

López Riera, aided by sterling work from editor Raphaël Lefèvre, does well to make all this hang together: stylistically, things shuttle daringly between downbeat realism and powerful, evocative imagery. On the realist side, there are the lengthy, vibrant conversations between the groups of women (contrasting starkly with the dour silences of the men) as they discuss their hopes and fears: one example has Ana’s grandmother remembering the feel of her husband’s hands before darkly recalling that “later, he used them for different things”.

Ana’s surreal question “have you seen him since he died?” feels perfectly natural in a film which always feels carefully poised on the edge of the surreal, where dark things always seem to be pressing in. This wider, magical world is evoked most strongly in moments of carefully rendered visual, nocturnal poetry from Giuseppe Truppi, whether we are witnessing a scene in a karaoke club or the intense colouring of the night-time skies. Only at a couple of brief moments does the rampant symbolism veer into the merely pretentious.

At the centre of it all is Ana, superbly played by first-timer Luna Pamiés as engagingly confident but privately insecure, down to earth but dreamy, and unsurprisingly fearful from the outset that her relationship with José will go wrong. The water, it becomes clear, is slowly getting into her as she starts to drift away from José: one criticism of the film is that their relationship itself feels a little diluted, given the richness of everything surrounding it.

José too is insecure, in this case about his masculinity and, from the very start, there are doubts that he might be inventing the time he supposedly spent in London as a way of making himself interesting to Ana. The seasoned Lennie and de Medina, a fine actress who has been offered woefully few film roles down the years, successfully bolster up the non-professionals. Co-scriptwriter Philippe Azoury plays an engineer who brings a dose of woeful, exotic Gallic charm to the role of Isabella’s love interest, in a film where people’s imagined lives are sadly not a liberation, but a burden.