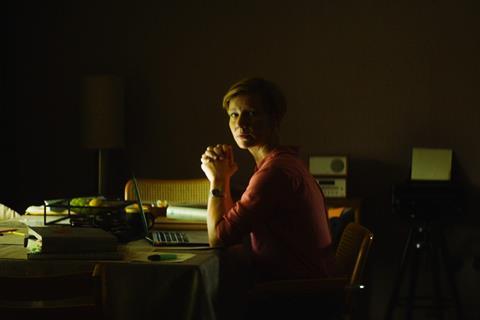 How can you feel at home in a country that only sees you as an outsider? Identity is a central theme of Exil, a slow-burning, Kafkaesque tale from writer/director Visar Morina in which one man’s paranoia reflects much wider social issues. The combination of the intriguing and the unsettling makes for a film that worms its way under your skin. It should strike a chord domestically in Germany but also in countries grappling with issues of integration and acceptance of their migrant communities.

Deadpan in its execution but always involving, Exil combines thriller-like elements, idiosyncratic behaviour worthy of Yorgos Lanthimos and humour based in awkward moments that hang in the air like a bad smell

Joseph Heller’s adage that just because you’re paranoid it doesn’t mean they aren’t after you informs the entire film. Xhafer (Misel Maticevic) is a pharmaceutical engineer from Kosovo who now lives in Germany with his German wife Nora (Toni Erdmann’s Sandra Huller) and their three children. He has a good job and a nice house. Arriving home one day, he discovers a dead rat strung up on his garden gate.

This one incident is like a tiny chip in a car windshield that may eventually shatter completely. A stressed Xhafer starts to take every little thing personally from uncooperative colleagues to harmless jokes that always seem to exclude him. Misel Maticevic portrays Xhafer with a stony composure that suggests a man barely able to contain his rage. It is easy to feel his simmering sense of injustice as meetings are changed without him being informed and patronising colleagues never quite remember his specific country of origin. They do know that he is not from around here.

There is a vague echo of Michael Haneke’s Hidden (Cache) in Xhafer’s growing unease at being a target for someone who seems to know a lot about him. His phobia of rats is constantly exploited by his tormentor. Rainer Bock is on scene-stealing form as Urs, a brusque, hostile colleague whom Xhafer casts in the role of arch nemesis.

The Kafkaesque nightmare is underlined by the production design of a workplace that is a warren of endless corridors and anonymous doors. Doggedly pacing from office to office, Xhafer could be one of the lab rats caught in an experiment. The building is also eternally hot. Cooling fans revolve in the background of scenes whilst Xhafer and his colleagues sweat through shirt collars. It is as if they are caught in an inferno.

Morina gradually supplies the bigger picture of Xhafer’s life. Everything seems to conspire against him, leaving him feeling as if nobody truly understands what he is going through. His mother-in-law’s disappointment over him is a festering sore. His wife isn’t always sympathetic, suggesting he consider that the dislike of him at work may be personal rather than racist. Responding to his ability to make everything about him, she scoffs at his vanity, suggesting: “If you were a woman, you’d have your breasts enlarged.”

Even though Xhafer is the victim in much of what happens, Morina seems determined not to depict him as a saint. Some of his actions reveal him to be less than admirable in his treatment of others.

Deadpan in its execution but always involving, Exil combines thriller-like elements, idiosyncratic behaviour worthy of Yorgos Lanthimos and humour based in awkward moments that hang in the air like a bad smell. The end result is a film that tackles serious issues whilst appreciating all the agonies and absurdities of human behaviour.