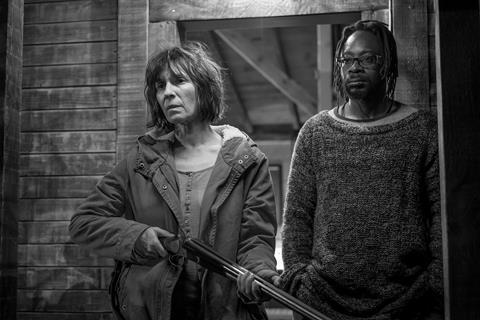 Svetla (Svetlana Yancheva) lost her job as a teacher when her school, in a Bulgarian village close to the border with Turkey, shut down for lack of students. Now she barricades herself against the future with a knife under her pillow and a tongue that cuts strips from anyone who crosses her. One day, when out hunting, she finds Bamba (Michael Fleming), a refugee fleeing conflict in Mali. For want of a better alternative, she grudgingly gives him shelter, and in doing so, incurs the displeasure of her neighbours but discovers an unexpected chance for happiness in this gentle, regionally specific comedy from Ivaylo Hristov.

Winner of the Best Film award in Tallinn, and the Golden Rose for best picture at Varna’s Golden Rose Bulgarian Feature Film Festival, Fear should find further interest on the festival circuit. The considerable appeal of Yancheva’s brusque performance will be a selling point, but the comedy may struggle to fully translate to audiences beyond its home region. The picture mocks the toxic and casually zenophobic attitude of the villagers, but to do so, it also gives them voice. Racial slurs abound, and the entrenched attitudes are perhaps not interrogated as rigorously as they might be.

Widowed for fifteen years, Svetla has settled into a life which expects little beyond graveside chats with her dead husband, and financial uncertainty. But although she briskly repels their advances, she is courted by at least two of the community’s older gentlemen: Border police chief Bochev (Stoyan Bochev) and the singularly charmless Ivan (Ivan Savov). But the respect she commands sours rapidly after she invites Bamba into her home.

Her reasons for doing so are initially unclear – she attempts to turn him in but is told that holding cells are at capacity. Brandishing her shotgun, she barks at him in Bulgarian to be on his way. But Bamba speaks English, with a precision that suggests his educated background. And for some reason, he is reluctant to wander off into the unknown. Their relationship, with no shared language, is strained at first. But gradually they connect, offering each other the emotional and physical support that both clearly crave. This development is not popular with the neighbours. Svetla’s credit is cut off at the local store, rocks are pitched through her window, and the word ‘whore’ is scrawled on her wall. But for all this, she embraces a contentment that she had given up on experiencing again.

While Svetla’s arc is a satisfying one and her character stamps itself upon the film, Bamba is less well developed. We learn that he is a doctor, that his wife and children were killed in conflict. But largely, he is defined by the reactions that his presence provokes rather than by his own actions. There is a slightly schematic quality in his characterisation – and, for that matter, of many of the villagers – which is echoed in the decision to film in black and white, the widescreen cinematography capturing the inhospitable ice-crusted Bulgarian winter landscape.

But for all this, there is a genuine warmth in the connection between Svetla and Bamba. Scenes in which they talk, at cross purposes and about completely different things, somehow result in a shared and satisfying understanding. And a poignant ending manages to convey both hope and despair simultaneously.