Unsettling, wry drama/comedy from Egypt is the winner of the 2021 Critics’ Week top prize at Cannes 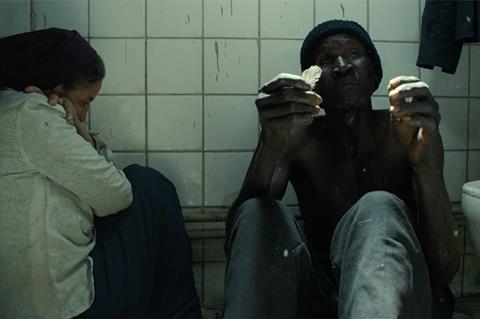 For a film about men and chickens, Feathers reveals a lot about women and Egyptian society. Omar El Zohairy’s darkly humorous debut feature is a film of biting social satire, wry chuckles and unsettling oddity. The lugubrious pacing and increasingly black tone mean that it could prove a hard sell commercially but the Grand Prize from Cristian Mungiu’s Critics Week jury should ensure that Feathers flies to further Festivals.

Even as poultry, the husband is still a demanding, pampered member of the family.

El Zohairy may have worked as an assistant to Egyptian directors, including Yousri Nasrallah, but his debut feature has more in common in style and execution with the films of Aki Kaurismaki or Roy Andersson. In the dusty corner of a desolate industrial landscape, an unnamed woman (Nassar) lives with her husband and three children in a squalid apartment. Production designer Asem Ali does a fine job of defining their life by a decor of peeling paint, scuffed furniture and threadbare sofas whose innards spill out in clumps of stuffing. The woman’s husband (Bassiouny) still acts as if he is lord of the manor. He doles out money and demands, fooling himself with the promises he makes. ”I’ll buy you a villa with a swimming pool one day,” he coos.The closest he comes is an ornamental water feature that he thinks is a classy addition to the dingy apartment.

The earliest scenes in Feathers feel the most focused and accessible as El Zohairy captures the wife’s life of domestic drudgery. She rarely speaks or smiles and her eyes are permanently downcast as she diligently cooks, cleans, cares for the three children and obeys her husband’s commands.

At a birthday party for one of the children, a magician encourages the husband to volunteer for the piece-de-resistance trick. Enclosed in a wooden box, he is transformed into a chicken, to the delight and amazement of all present. Changing him back does not go according to plan and the woman is left with a chicken rather than her husband. It could even be an improvement.

An absurdist situation is played with a straight face as the film becomes about the woman’s odyssey through abandoment. She has to carry the burden of being the breadwinner, keeping the family together and discovering what really happened to her husband. She also feels obliged to feed and house the chicken. Even as poultry, the husband is still a demanding, pampered member of the family. Men in general are often her biggest problem as they think they know best or prepare to make their move.

The woman’s attempts to find work and support her family provide some dry comic situations. El Zohairy embraces the deadpan in those moments, keeping his camera static as the action or mayhem unfolds off screen. The soundtrack nudges our imagination as the woman encounters a small menagerie of foes from a cheeky monkey to a ruthless guard dog and a sickly chicken that could still be her husband. The slow-burn pacing of Feathers starts to tell as it nears the two hour mark but it this is a film whose deliberate unfolding almost distracts from how dark it becomes. The woman’s life has gradually been transformed and when that is threatened she shows no mercy in acting to protect her newfound liberation.