An enigmatic Turkish man observes the rhythms of everyday life 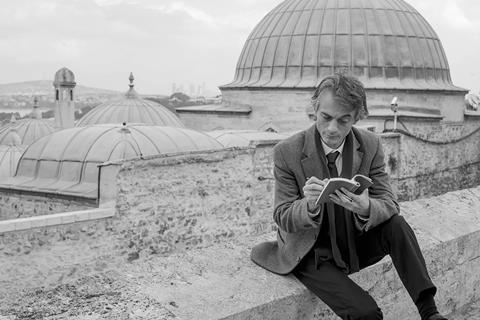 A playfully enigmatic drama that lays down hints of political commentary without being explicit, the modestly staged black-and-white (with a dip into colour towards the end) Four Cornered Triangle is intriguing rather than compelling. Its episodic nature, though, makes it an easy watch, with Mustafa Dinc appropriately intense as a man whose only task is to coldly observe all that happens around him.

This enigmatic watcher can be judgmental, but it is clear that he must always describe things as he sees them, rather than hold back on his comments. Often talking to the camera — he describes himself as an “international observer” — he gloomily and resolutely goes about his work with scant emotional regard for others.

While the film may be a tough sell for non-Turkish audiences, it is attractively shot and rigorous in its modest storyline that perhaps hints a greater depth than it actually has to offer. There are intriguing Kafkaesque moments as this observer hints at an authority — based on what he sees — that he does not actually possess.

At the start of the film, he is working at a tobacco warehouse where he is barely tolerated by workmates (they call him a “freak” behind his back) and despised by his boss, who is looking for a reason to fire him. This comes to pass when he spots the boss with another worker’s wife at the beach and reports this to workmates, who respond by dragging her husband up to the boss’s office.

Wandering the streets, he tries to turn observation into work, though when caught staring into a window, the police take the view that he is “peeping” rather than “observing”. But he draws no lines at who and what he observes — from beggars and street vendors to politicians and thieves — and is convinced that his notion of truth is never in doubt or that he is doing anything wrong.

Art mimics life as he finds himself on stage, where his performance is laughed at and applauded by the audience, even though he does not really know why. Amusingly, he also takes to selling observations on the street, which turns out to be a surprisingly successful business.

Screenplay Gorken Yeltan, based on the novel by Salah Birsel