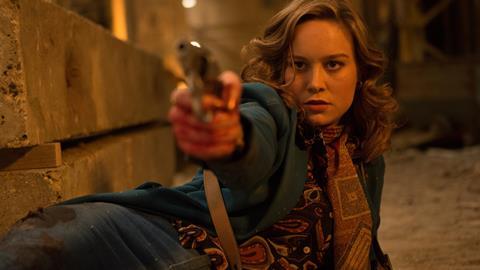 To describe Ben Wheatley’s latest picture as a blast doesn’t even come close to capturing the film’s adrenalised assault on the senses. The arms deal gone beyond bad premise paves the way for a sustained and unrelenting blitzkrieg of action. It takes a model similar to that of Gareth Evans’ Indonesian blood bath, The Raid, but, rather than knives, the characters parry stabs of wryly comic dialogue, courtesy of Wheatley and his wife and writing partner Amy Jump. And bullets. Lots of bullets.

A bruisingly effective piece of entertainment carried by comedy

Free Fire’s world premiere as the opening of Toronto’s Midnight Madness section is a near perfect match of material to audience. The cultish appeal of the movie will work best theatrically rather than on other platforms; the larger the audience, and more vocal its participation, the more effective will be the film’s war whoop of energy. The blunt force of the action relies on the collective blood lust of a genre savvy audience which will pick up on references to films like Assault On Precinct Thirteen and not trouble itself too much with the fact that both the characters and the action border on the cartoonish at times.

The backdrop is Boston in 1978, the setting a deserted warehouse which still nurses the remnants of its former life as an umbrella factory. Nervy camerawork captures the jumpy tensions as two groups meet to broker a gun deal. On one side are the Provisional IRA, represented by grizzled old hand Frank (Wheatley regular Michael Smiley) and his flinty-eyed second in command Chris (Cillian Murphy). Brokering the deal is Justine (Brie Larson), a no-nonsense chick with a petrol blue blazer and a nice line in exasperated eye-rolls. But Frank and Chris make a big mistake in bringing along a pair of goons as hired muscle. Bernie (Enzo Cilenti) and Stevo (Sam Riley) are probably not the stabilising influences you would hope for during a high stakes deal for thirty assault rifles and enough ammo to stage a coup in a mid-sized country.

The purveyors of the weapons include South African braggart Vernon (Sharlto Copley), a rodent in a polyester suit which is soon to be perforated like a tea bag. His back-up team include Gordon (Noah Taylor) and hot-headed Harry (Jack Reynor). The middle men are the amiable and seemingly unflappable stoner Ord (Armie Hammer, great fun in a role which showcases his comic skills) and his buddy Martin (Babou Ceesay).

With so many jostling egos, and an unlimited supply of weapons, the surprise is not that the encounter descends into violence but that it takes as long as it does. Wheatley ekes out the encounter, building the tension by increments, so when the staccato battery of gunfire commences, it’s almost a relief.

There are a couple of overused elements here. The grade gives the film the all-too-familiar thriller colour palette of orange and teal. And then there is the ironic use of easy listening music - in this case John Denver - which has the stamp of Tarantino all over it.

Nevertheless, Free Fire could perhaps be read as a satire of America’s celebratory approach to gun culture: the answer to the gun problem is yet more guns. Or it could simply be viewed as a thrill-ride of a movie designed to stir the blood but not engage the mind. Either way, it’s a bruisingly effective piece of entertainment carried by comedy, which hits its targets rather more successfully than the wildly strafing bullets.