'From The Land Of The Moon': Cannes Review 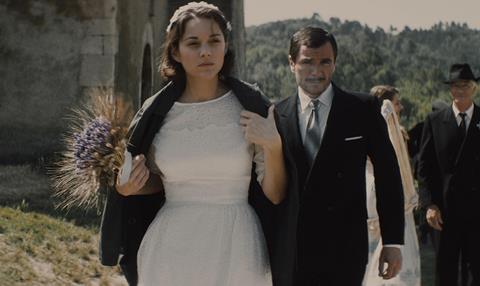 A sensual, independent-minded woman is considered a danger to herself and the natural order of society in From The Land Of The Moon (Mal De Pierres), a languid, handsomely crafted adaptation of the Milena Agus novel. The ingredients of an old-fashioned romantic weepie are given class and conviction by director Nicole Garcia whose elegant restraint helps to ground the more fanciful elements in some sense of reality. Her approach also makes the eleventh hour revelations easier to swallow.

In an age dominated by superhero blockbusters and CGI-spectacle, there is an underserved audience of those who once happily wallowed in the tragic romance of The English Patient or Out Of Africa. From The Land Of The Moon is not in that epic league, being too conventional and tasteful to excite critical support - but it might prove more of an audience pleaser especially in territories where the presence of Marion Cotillard and Louis Garrel can draw crowds.

Transposed from the Sardinian setting of the novel to the south of France, From The Land Of The Moon unfolds almost entirely in flashback. Gabrielle (Cotillard) and her husband Jose (Alex Brendemuhl) arrive in Lyon where their teenage son is to compete in a piano competition. When they stop at a certain street, Gabrielle impulsively leaves them to seek news of a long ago lover who once lived at this address.

We then return to her early life as a young woman in love with the notion of love, wading into a river to cool her burning sexual desire. Wilful and unpredictable, she accepts her family’s proposal of a loveless marriage to farm worker Jose rather than the threat of incarceration in a mental hospital. Later, a diagnosis of kidney stones obliges her to take a six-week cure at a Swiss sanatorium where she meets Andre (Louis Garrel). Andre is a dashing lieutenant, wounded during the fighting in Indochina, and is her absolute romantic ideal - so naturally they fall in love. He could have stepped from the pages of a Hemingway novel but his high moral standards and her married status make their union impossible and further thwart her hungry heart.

Garcia contrasts Gabrielle’s relationship with the key men in her life in two sex scenes. The one with Jose is a business transaction; brief and joyless. The one with Andre is slow and sensual as he guides her towards the heights of ecstasy that she has always wanted.

From The Land Of The Moon may sound like the stuff of cheap romantic fiction but Garcia keeps it this side of believable and very watchable. The understated performances never strive for histrionic effect, the passage of time is subtly indicated, there is a generosity of spirit towards all the character, including the long-suffering, incredibly understanding husband, and it looks a treat from the sparkling azure seas to the sprawling fields of lavender and the clouds that circle the Alpine peaks. Incurable romantics should happily surrender to its allure and the more cynical have the reward of eventually discovering that there was more going on here that initially meets the eye.