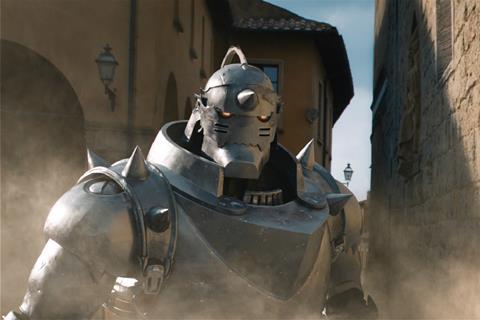 In an average year for high-profile live-action manga adaptations, Fullmetal Alchemist becomes the latest page-to-screen transition for a  popular Japanese property. Based on the series written and illustrated by Hiromu Arakawa — already the inspiration for two anime television programs, plus a pair of animated films — it’s a homegrown affair, unlike the westernised Ghost In The Shell and Death Note. What the end result boasts in authenticity, however, it can’t quite match in broad appeal.

Given the director’s visual-effects pedigree, it’s hardly surprising that Fullmetal Alchemist looks the part throughout

With evident energy and impressive production values, Fullmetal Alchemist attempts to lure in huge numbers of existing fans while branching beyond that extensive base. Of course, the former should flock to cinemas following the feature’s debut in Tokyo International Film Festival’s opening night slot, with a subsequent local release slated for early December. Given the heightened melodrama and wavering coherence on display, attracting the latter is far from assured, particularly in overseas markets.

With the source material set in a realm where transmuting matter is commonplace, experienced director Fumihiko Sori (manga-to-movie Tomorrow’s Joe and game-to-anime Dragon Age: Dawn Of The Seeker) tries to turn Fullmetal Alchemist’s sweeping tale of life, love, loss, sacrifice and science into an engaging blend of sci-fi, fantasy and adventure. Involving enough, though never completely transporting, the film doesn’t quite achieve that feat. Instances of alchemy abound in the narrative —  walls are converted into projectiles, brick courtyards into hungry beasts — but the same magic can’t improve soap opera-like theatrics, the overuse of expositional dialogue or an eagerness to flit between action scenes.

Introduced as children during the movie’s prologue, brothers Edward and Alphonse Elric sit at the centre of a story that starts the same way many have since Mary Shelley’s Frankenstein: with death and the determination to reverse its effects. After losing their mother suddenly, the fledgling alchemists try to bring her back. “Adult humans are made of readily available products,” one remarks. Alas, as the duo dabbles in the illegal and dangerous field of creating life, Al’s soul becomes separated from his body.

Years later, Ed (Ryôsuke Yamada) is now the fullmetal alchemist of the film’s title — exerting his power over metallic materials, and sporting a shiny prosthetic arm and leg. Al (voiced by Atom Mizuishi) remains alive courtesy of a suit of armour, but Ed is dedicated to making his brother whole again. The ruby-coloured philosopher’s stone is his solution, in a quest frowned upon by the solemn Colonel Roy Mustang (Dean Fujioka) and secretly aided by kindly Captain Maes Hughes (Ryûta Satô).

Encompassing the Elric’s zesty mechanic and offsider Winry (Honda Tsubasa) as well as several other military officers, Fullmetal Alchemist isn’t lacking in characters — or dramas, battles and moral quandaries to immerse them in. Indeed, it’s easy to see how this rich arena furnished 27 printed volumes, as well as two TV series spanning more than 50 episodes each, and spawned such a passionate following. Perhaps that’s why the feature’s jumpiness feels so pronounced: there’s plenty to work with, but it rushes between emotional speeches and showdowns.

Still, it often has some fun doing so, even while sporting a mostly serious tone; by the time that one villain claims he’ll be the king of the world, chuckling — and smiling at the synergy with Sori’s first filmmaking credit as a character animator on James Cameron’s Titanic — is inevitable. Given the director’s visual-effects pedigree, it’s hardly surprising that Fullmetal Alchemist looks the part throughout, with technical contributions proving solid. Also predictable is the movie’s clear franchise aspirations.

Screenwriter: based on the manga by Hiromu Arakawa