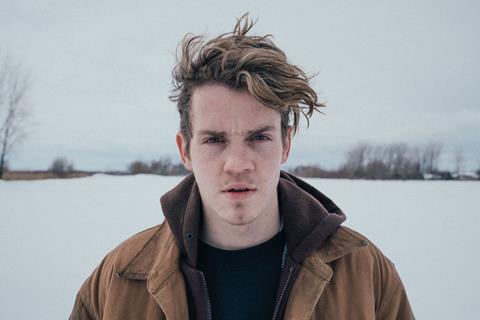 In a rural Quebecois community with a population of just 215 people, the loss of one of its residents in a car accident cuts deeply. And the fact that Simon Dubé was just twenty-one, “the hope” of a town which has been hollowed out by migration to the city, adds a layer of significance in this place which wears its insularity like a badge of pride. Denis Côté’s eerie fantasy drama juxtaposes the mundane and the parochial with the supernatural, to sometimes disquieting effect. There’s a sense of dislocation, between the characters, between the story strands, even between consecutive scenes, which means that the picture does not always flow easily. An open-ended conclusion, which leaves threads – an in one case a character – hanging in mid air will not be to everyone’s taste.

This is the third of Côté’s feature films to play in competition at Berlin; the first, Vic & Flo Saw A Bear, took home the Alfred Bauer award. Ghost Town Anthology, which was adapted from a novel of the same title by Laurence Olivier, takes a similar approach to Joaquim Trier’s Thelma, in that it uses other-worldly and metaphysical imagery to explore more familiar and prosaic themes. While the film’s guarded and sometime disjointed storytelling could see it struggle to connect with audiences to the same extent as Trier’s film, it should still generate interest on the festival circuit.

A blanket of depression coats the community, as thick as the relentless winter snow

The death of Simon is all the more shocking to the people of Irénées-Les-Neige because it doesn’t seem to have been an accident. But, as the picture unfolds, it becomes clear that a blanket of depression coats the community, as thick as the relentless winter snow. The manager of the town’s only diner confides that he too has had the urge to drive fast and swerve into oblivion. And the memory of a murder-suicide from the past has been neatly brushed away.

The town’s chipper Mayor, Mrs Smallwood (Diane Lavallée), is a proponent of the ‘life goes on’ approach to trauma; she takes the appointment of a grief counsellor as a personal slight. People here are private folk who rely on each other, she snaps, and the last thing they need at a time of grief is an outsider snooping around. But although it becomes clear that the community is close knit by necessity rather than choice, she is right about the town’s attitude to strangers.

The grief counsellor who arrives is a young woman wearing a hijab. The staff at the diner gaze, open-mouthed and unable to process her otherness. The Mayor forces a tight little smile as she assures the counsellor that they have no need of help – the caveat “from someone like you” is unvoiced but implicit.

What could be more terrifying for this embattled, inward-looking community than an influx of visitors? But the still, silent strangers who appear at the edge of the night are not, or at least are no longer, of this world. The dead reappear. And they seem to be quietly judging the townsfolk.

Côté makes minimal use of score – there’s an atonal grumble which heralds the appearance of the mysterious figures, but not much else. Elsewhere too, the picture is understated, almost matter of fact. The handheld camera scans interiors which are almost defiant in their ordinariness. Likewise the resigned reaction of the townsfolk, many of whom are content to just live alongside the dead. Others see them as an invasion. The fear of outsiders, the reluctance to share land – its not hard to unpick the film’s themes. But the significance of the woman who ends up suspended in mid air over a muddy field? That’s a hard one to pin down.