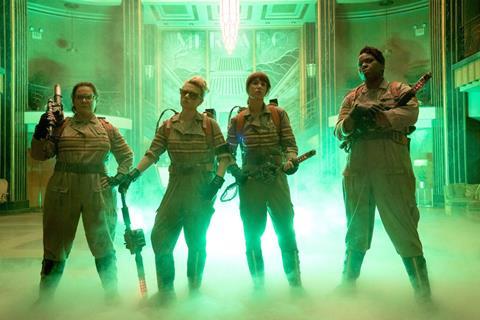 After months of negative online buzz, director Paul Feig’s Ghostbusters remake emerges as a consistently funny pleasure, never quite as sharp or inspired as the 1984 original, but radiating such good cheer that comparisons between the two films don’t much matter.

This Ghostbusters doesn’t lazily insert the actresses into the original characters’ roles, instead taking the time to come up with new dynamics — and far more pathos — for this quartet

Led by the warm chemistry of stars Melissa McCarthy and Kristen Wiig, this new film follows in the footsteps of Feig’s earlier work (most notably Bridesmaids and Spy) by doing a giddy gender switch on a typical male-dominated genre. But it’s to the filmmakers and cast’s considerable credit that this Ghostbusters follows its own silly, sneakily feminist bent rather than simply recycling the old movie.

Starting its global rollout in the UK on July 11, Ghostbusters will benefit from audience awareness of the original film, and McCarthy and Wiig’s star power should help as well. Sony may be concerned that some sectors of the audience have lodged loud complaints that Feig has dared remake a beloved comedy with female leads, and while some of that internet furore is merely sexist swill, it may indicate growing disinterest in yet another reboot of a once-popular franchise. Even so, solid reviews and the movie’s crowd-friendly tone should be enough enticement for curious filmgoers everywhere.

Wiig plays Erin, a Manhattan physics professor whose falling out with best friend Abby (McCarthy), a paranormal expert, stemmed from Erin’s desire to distance herself from their shared controversial belief in ghosts. But after seeing a spectre, Erin teams up with Abby and her engineer colleague Holtzmann (Kate McKinnon) to combat the rise in ghost activity, eventually joined by Patty (Leslie Jones), an Mass Transit Authority employee who has also witnessed paranormal behaviour in the city.

As is often the case with modern reboots, Ghostbusters has to devote a certain amount of time to fan service, referencing supporting characters from the original film while also throwing in cameos and call-backs. (Set in contemporary New York, the new Ghostbusters exists in a world in which the 1984 movie never happened, allowing cast members from the original film to pop into the story briefly as new characters.)

These obligatory moments are executed slightly awkwardly and perfunctorily, and Feig also struggles occasionally to balance comedy and action, a problem he didn’t experience with 2015’s Spy, which also starred McCarthy. But if this Ghostbusters wobbles a little, it’s fortified by the four leads’ appealing rapport.

McCarthy and Wiig, who were Bridesmaids co-stars, adeptly illustrate their characters’ strained relationship, highlighting both the tension and the lingering affection between them. It also helps that McCarthy, for once, hasn’t been given an off-puttingly broad comic role. Her Abby is a slightly dorky, eminently lovable scientist who isn’t burdened with the one-note coarseness of the actress’s characters in Identity Thief and Tammy. McCarthy takes full advantage of the opportunity to reveal a winning vulnerability and sweetness. Likewise, Wiig is appreciably restrained as Erin, her guilt over having mistreated her friend leading to a surprisingly touching finale.

The more oddball personalities belong to Holtzmann and Patty, and McKinnon and Jones do what they can in supporting roles that are decidedly outlandish, perhaps to compensate for the fact that they’re not as well-drawn. Jones, a long-time stand-up and a relatively recent addition to Saturday Night Live, has fun being the brash, mouthy member of the group, while McKinnon (her SNL cast mate) digs into Holtzmann’s bug-eyed weirdness, but both characters feel like blunt-force comic relief, Feig and her co-writer Katie Dippold straining to give them enough to do.

As the stakes escalate and the entire city becomes threatened by an apocalyptic unleashing of evil apparitions, Ghostbusters maintains a playful spirit, the impressiveness of the effects-heavy action sequences mostly balanced by the lively interplay between the leads.

In Bridesmaids, The Heat and Spy, Feig displayed a light touch, satirising the macho conventions of those films’ genres without ever coming across as preachy or strident.That adeptness continues with Ghostbusters. Criticism for redoing the original film with female leads is slyly addressed by both clever jokes (our heroes learn they should never read nasty online comments) and, more effectively, the movie’s overall theme of the challenges women face to be taken seriously. Repeatedly, these characters are dismissed because of their insistence that ghosts are real, but there’s also a subtle sexism working against them, and Feig uses that fact as a source of pointed humour that makes these women deeply sympathetic.

Along those lines, this Ghostbusters doesn’t lazily insert the actresses into the original characters’ roles, instead taking the time to come up with new dynamics — and far more pathos — for this quartet. To be sure, the new film lacks the sort of brilliant deadpan timing that Bill Murray brought to the ’84 film, but the remake compensates with its own comic rhythms, which are goofier and sunnier. And in Chris Hemsworth — who plays the ghostbusters’ hunky, dim-witted receptionist — the new movie has a spectacularly funny dumb guy.