'Godzilla King Of The Monsters': Review

The Monsterverse is back with a roar 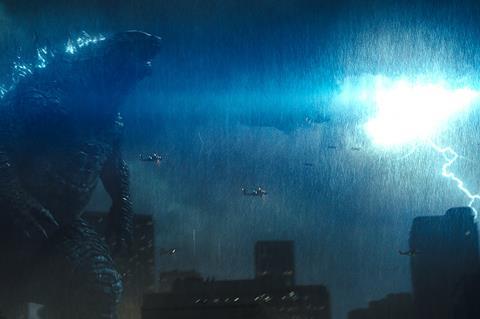 Godzilla: King Of The Monsters

The lumbering radioactive mutant dinosaur who trashed Tokyo in Toho’s Gojira in 1954 has undergone more reinventions than Spider-Man. Historically, it has proven easier to rethink the franchise from the irradiated ground up than to develop a storyline over a series of films. Godzilla King Of The Monsters takes its title from the 1956 American release version of the first film, and picks up from the ending of Gareth Edwards’ 2014 Godzilla. Elements tipped in from Kong Skull Island flesh out Warner Bros/Legendary Entertainment’s ongoing Monsterverse project, drawing battle lines for the already-in-the-can Godzilla Vs Kong. Given the mythic resonance of that conflict, this instalment risks seeming like a mere preliminary bout before the title fight to determine which movie monster more deserves the title King.

A lumbering behemoth that keeps tripping over its own tail

As is customary in giant monster movies, human stories that take place in the wreckage-strewn wake of the titanic battles offer considerably less entertainment value than the sheer spectacle of creatures causing large-scale devastation. Director Michael Dougherty has worked in the big budget arena as screenwriter on instalments of the X-Men and Superman franchises, but has mostly directed small-scale horror films (Trick ‘r’ Treat, Krampus). Like many creatives, he struggles to bring his own personality and interests to a lumbering behemoth that keeps tripping over its own tail.

The shadowy Monarch Organisation has penned a number of giant monsters – called ‘titans’, presumably because the semi-rival Pacific Rim franchise copped the traditional term kaiju – in sites around the world. Defecting Monarch scientist Dr Emma Russell (Vera Farmiga) teams with ‘British army colonel turned eco-terrorist’ Alan Jonah (Charles Dance) to use a laptop-sized gadget she has invented to awaken the fearsome three-headed ‘Monster Zero’ and assorted lesser giants to trample the world in order to save the planet from humanity.

Another Monarch faction, run by Dr Serizawa (Ken Watanabe) and including Emma’s grumpy ex-husband Mark (Kyle Chandler), backs rival alpha beast Godzilla in a fight with Monster Zero. Caught in the middle of a potential apocalypse that boils down to a family squabble is Madison (Millie Bobby Brown), daughter of the feuding Russells.

The film too often loses faith in its true stars – the Toho staple of giant monsters, which extends beyond Godzilla and Monster Zero (aka Ghidorah, the Three-Headed Monster) to include the magic giant moth Mothra and the vicious pterodactyl Rodan.

Moments of awe as these titans clash in storm-wracked skies or unleash vast primal forces are too often curtailed so the film can cut away to trite family arguments or concerned scientists and military folk looking at screens. A few players – Watanabe, Farmiga, Dance – actually have the presence to go eye-to-eye with Godzilla and not seem intimidated, but an extraordinary amount of time is spent on finding things for the top-billed Chandler to do in a dull role as fed-up Dad.

After limiting the action in Godzilla to the Pacific and Kong to one island, this raises the stakes by presenting a global crisis – with barely-glimpsed supporting titans laying waste to cities around the world in a riff on Toho’s Destroy All Monsters (1967) - and staging major set-pieces in China, Antarctica, Mexico and Atlantis before settling on Fenway Park, home of the Boston Red Sox, as location for the final free-for-all.

Dialogue exchanges consistently land with a thud and we get too many moments of self-sacrifice for any of them to count – one major player dies without even a close-up – but King of the Monsters delivers what its genre requires. Truly awesome monster scenes fill the screen, often imbued with emotional resonance by music cues. This not only reprises the memorable Godzilla and Mothra themes from earlier films but uses a Serj Tanakian cover of Blue Oyster Cult’s ‘Godzilla’ over the end credits – which, of course, set up a post-titles sting to prove that we’ve not seen the last of any of these creatures.